the harp gets some wings 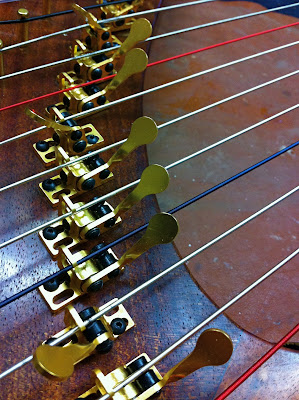 I couldn't finish the story of this harp without some close-ups of Betty Truitt's lovely levers. The ones standing out of order are the B and E levers because, of course these strings don't 'get sharp'- so they  start off as naturals and lever down to be flats. 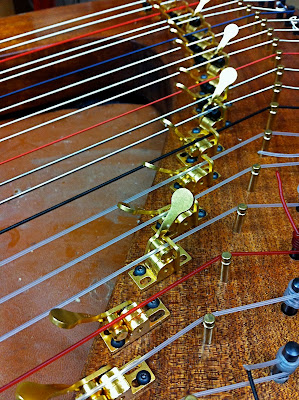 I have to admit that this final fitting took me an unseemly amount of time, and I certainly have come to respect people who set these things up on a regular basis. There is an uncanny amount of detail and precision in the design, layout and placement of these fittings.

I must also reiterate how wonderful the design work in this harp is, and that is all down to Rick Kemper- who is, I suspect, much more of a 'details man' than I am, and has gone to enormous lengths to share the fruits of his considerable efforts. I would have made some pretty fundamental errors without his expertise as a spring-board.

I'm excited to have made this for a particular family too, and I just hope that it fulfills its mission elegantly and without any glitches. It was a great relief when the strings first went up to tension- I could feel every joint and surface that I had assembled being strained and tested, and the tension was unbearable as the pitch got higher and implosion seemed to my little brain to be inevitable, but it all just settled and coped. 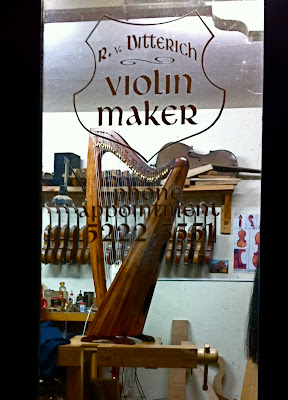 Posted by robert.ditterich at 12:20 AM 5 comments: 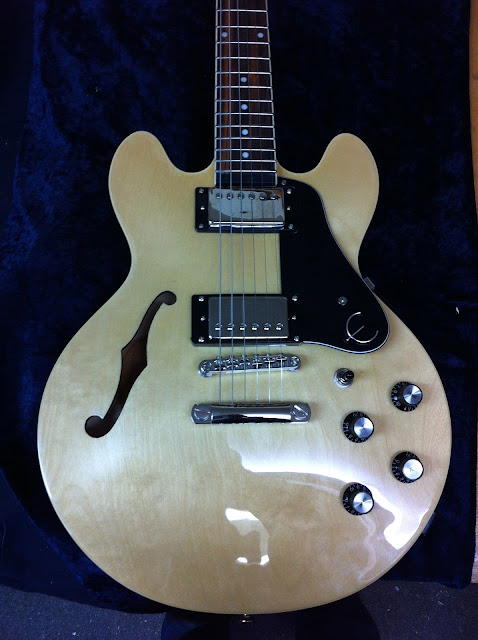 The Epiphone 339 Ultra, pictured here has an interesting place in our modern musical and industrial stories. This is the 'affordable' version of the modern Gibson 339, and that claim alone speaks loudly about one of our modern dilemmas.

The Epiphone brand began with the work of a Greek immigrant luthier- a violin and guitar maker of fine reputation. His instruments were such that his brand name has been perpetuated by the larger American company that bought his brand. But the Epi pictured above is hand-made in China, and it is a really beautiful instrument to play.

The hard work of one generation seems to create comfort and greater expectations in the next, so the things we make in our wealthier context become harder to afford, and we out-source to poorer emerging economies. It doesn't take much intelligence to see that this is one of the central problems facing us now, whether you are for example, Greek, American or  Japanese.

On one hand, the Chinese people who made this instrument are being brought into some level of comfort from our support of their products. On the other hand, by supporting them we make it harder for people to make things in our own country. I make instruments but it doesn't make sense for me to make one of these. I'd spend more on the components than the cost of the Epiphone- and in my mind, this is a musical power tool, a product. It is a beautiful appliance. And although it feels nice not to have to make everything I use,  as a maker, I couldn't justify purchasing the three or four times costlier  US made article (but if I was a good player, I probably could). So I become one of the consumers that contribute to the scenario wherein our societies become poorer (in several ways) because we can't make things, and consequently we must lose some of our value as markets for other people. That will probably become self-defeating even for those that can still produce. What good is an unemployed Italian or Australian to an aspirational Chinese worker if he can no longer finance his life?

I don't have the answers here, but I really believe in small scale enterprise and diversity, and I'm sure that it isn't healthy to have fewer, larger manufacturers chasing larger homogenous markets, and being able to apply downwards pressure on costs anywhere in the world. That's why, whenever possible, I invest my daily expenditures in people rather than price. But in this case, I'm as bad as anyone, except that I did buy from a local dealer, despite the lure of the net. 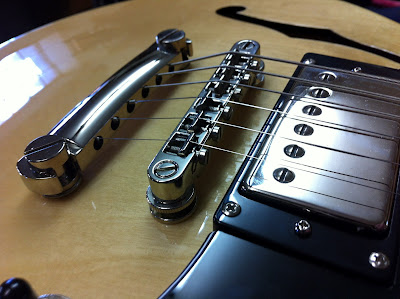 The Gibson and Epiphone brands have maintained a traditional look about them, even as guitars became more complex and flexible in use. The body shape pays homage to acoustic cousins, and it is born of lovely geometry intersecting with function. It still has an 'f'' hole, even if it doesn't do much anymore, being only partially hollow, and the edges are bound in this example, with a material that matches the peg heads and fingerboard. 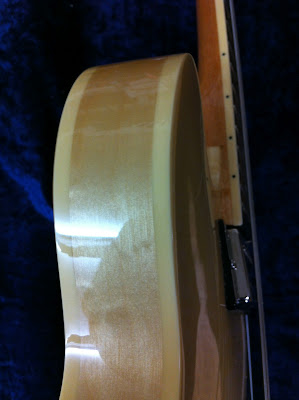 Posted by robert.ditterich at 9:48 PM 2 comments: