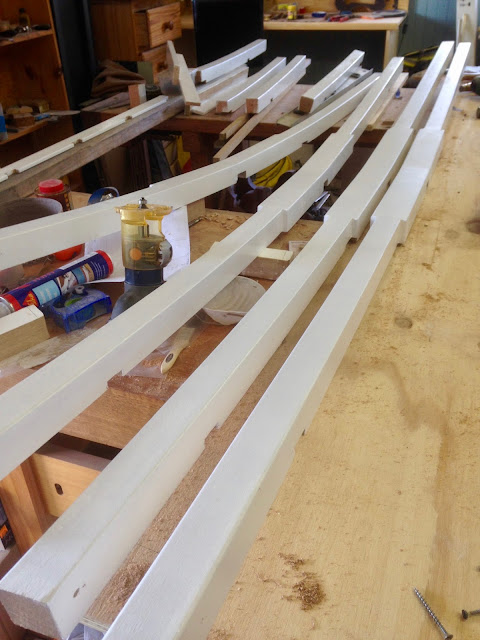 The frame of Bandicoot's cockpit roof looks like some sort of puzzle, but skinned in ply it looks so simple, I wonder what all the fuss was about... 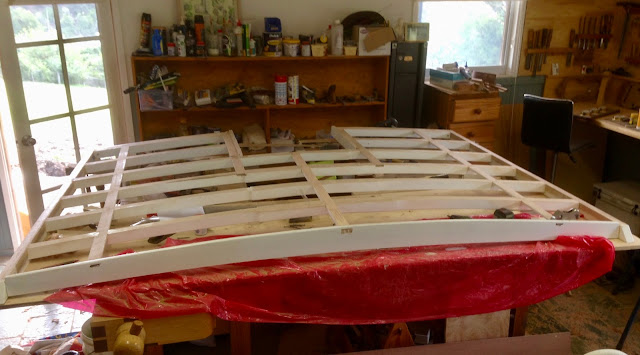 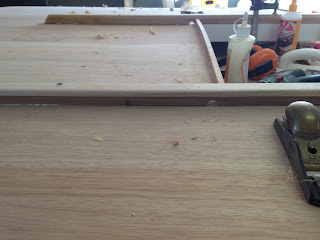 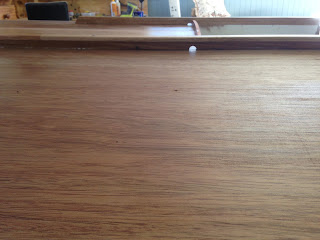 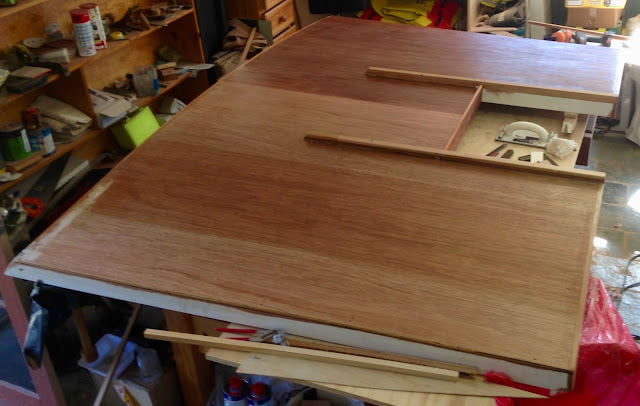 Posted by robert.ditterich at 6:18 PM 2 comments: 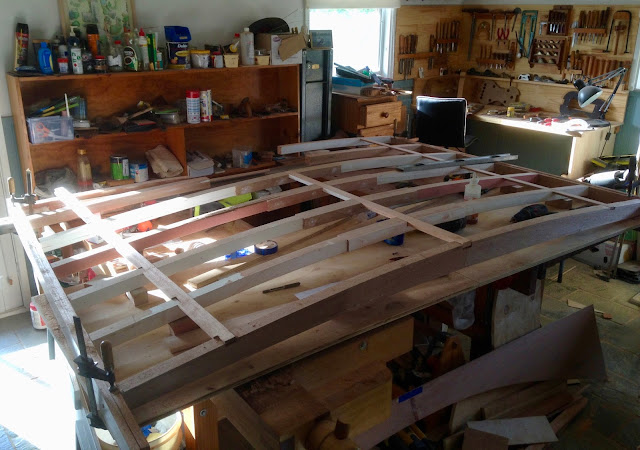 Not really 'benchwork' when you bury two good sized benches under the 'piece' and have cascades of off-cuts, tools and timber all over the floor. I'm proud to say all of these pieces  are from timber I have saved from other jobs, some going back decades. This is a cockpit roof for Bandicoot. The really tricky part has been accomodating the asymmetry in the back of the cabin and the cockpit itself. Measuring up on the boat and re-creating it in the incomplete workshop has required endless triangulation and small adjustments in all three dimensions...I sure hope it fits. 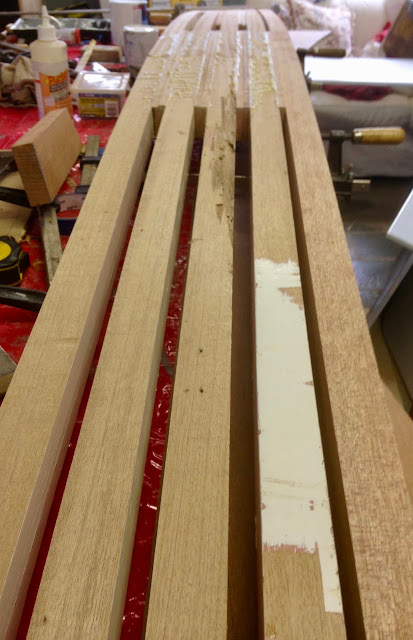 By covering the cockpit, Bandicoot is morphing from a utility (truck) to a wagon and I thought there may be some interest in the process involved. Covering the cockpit will add to the all-weather use of the boat I hope.The hull tapers in a gentle curve from cab to transom so the rails will match the curve of the coaming. I'm just building a roof, the sides will be open roll up canvas. 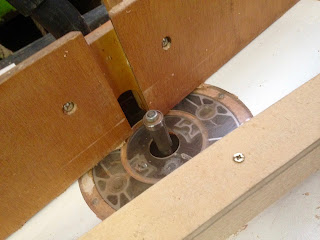 All of the roof beams are from Philippine Mahogany reclaimed from our house renovation. By making half widths it was possible to squeeze three pieces out of each old rafter. These were pattern routed with a flush trim bit on my router table. 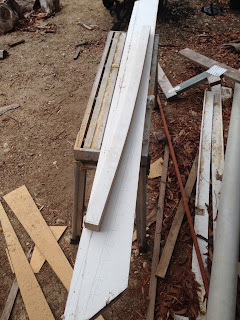 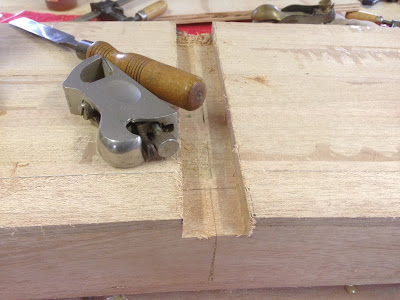 Clamped together, the beams could be accurately rebated to accept little ties or purlins. They form the only right angles in the entire structure. In the old measure the roof is about 9ft wide and these beams have been rather labor-intensive... 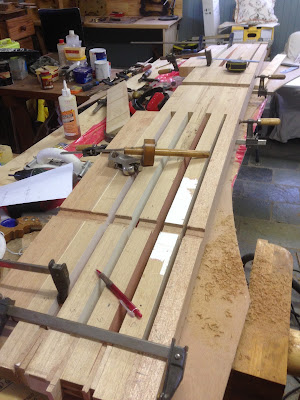 Posted by robert.ditterich at 1:51 AM No comments:

a new journey for Fleur the greyhound

The phone call said that she was young and so sick and exhausted that it wasn't safe yet to spay her, or even to give her worming tablets. Fleur was recovering from acidosis, but maybe we could take her on?

Acidosis? We had a vague idea this might have something to do with the shut down of muscles after maybe dehydration, or something, but a bit of research told us as much about how she must have been treated as it did about the condition. Please google 'acidosis in greyhounds' for the medical story, but the bottom line is that she was run so hard for so long in the heat that the build up of lactic acid was so great and her dehydration was so bad that she  had some sort of  melt down.

Apparently the trainer took her to the Vet sometime after this and told her that the dog was sick, and 'no good for racing', asking for her to be 'put down'. In fairness, I know that this isn't the normal behaviour of regular trainers, but regular trainers are not the ones responsible for the bad news that rescue centres and vets have to deal with.

We were told that she seemed depressed. People often seem surprised that dogs can be depressed, as though we humans have a monopoly. Black and other coloured dogs can have the 'black dog' too.

When she came to us she had vomited in two cars- it seems cars will be an issue for her for a while and my guess is that a car was the place where her dehydration kicked in and was exacerbated. She went quickly to the quiet corner prepared for her here by Julia and she lay absolutely motionless for some hours. On her first evening with us the breakthroughs were minor but significant. She gradually started to respond to quiet reassuring whisperings and stroking. We introduced Sooty (our adopted greyhound) to Fleur, and after some gentle (quite tender) sniffing and wagging of his tail, he decided that she needed help, and quietly lay down beside her for a while. Within a few hours they were poking about in the garden in parallel, looking for smells worth pondering.

Julia has always held that the best way to gain trust and confidence in a frightened dog is from really tasty  food given from the fingers. It seems to be working with this one too. This morning she seemed brighter, even wagging her tail in greeting us, and I know that the process of trust and recovery has begun. But it will take time.

Our previous fostered greyhound 'Tippy' is happily with a new family after more than four months with us. If you are interested in this issue, there are previous posts here on this blog under the tag 'animals'. 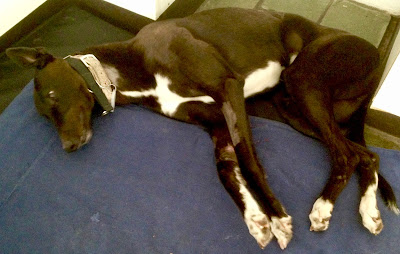 When she recovers she won't thank me for these unflattering photos. Three big areas shaved for intravenous needles, poor light so as not to trouble her, but you won't recognise her in a few weeks or months. If she survives, the eyes will no longer be vacant, the fur will be glossy and clean, her bones will be hiding and she will probably know how to strike a pose. 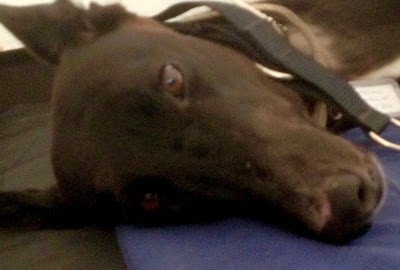 Posted by robert.ditterich at 5:01 PM 2 comments: 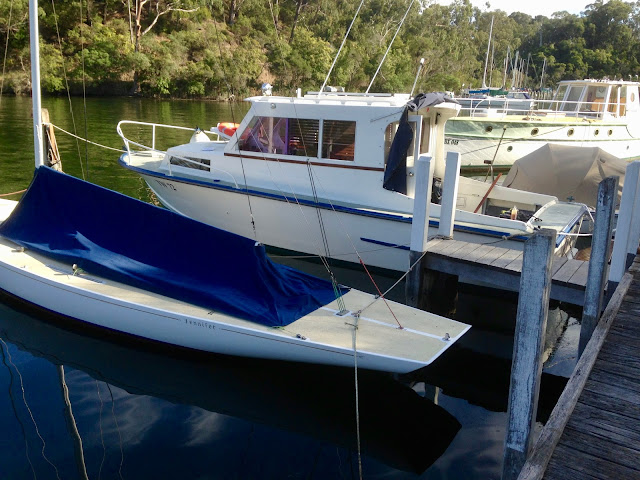 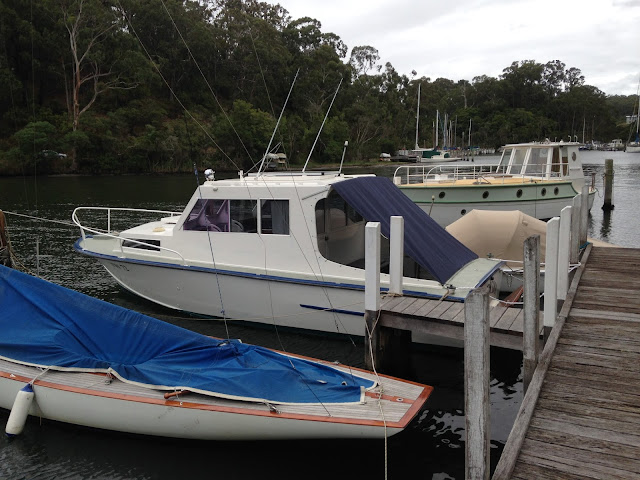 Two pieces of trim seem to have taken an inordinate amount of time and material. The sun visor has a practical purpose, but the trim strip and visor were considered mainly ( if I'm honest) because I wanted to de-power some of the verticality in the very high cabin lines. I hope that the visor gives the roof a longer feel, instead of just being 'folded' down from the very large windscreen. The tall slab sides and not particularly elegant (but great to look out through) side windows have been broken up by the dark trim line which runs as an extension of the edge of the lower roof line.
. 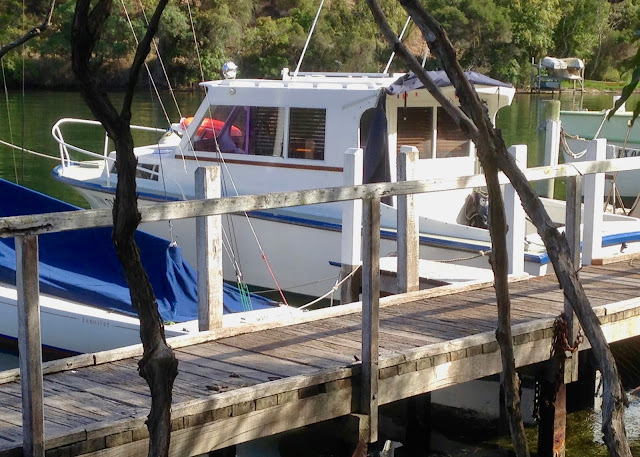 This little visor was nearly 9ft long and was constructed from five pieces of 9mm marine ply. Below; upside down, the angles are to nestle the unit against the compound angles of the three windscreen panels. 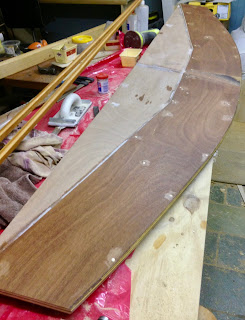 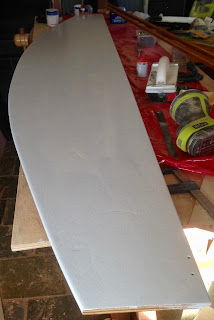 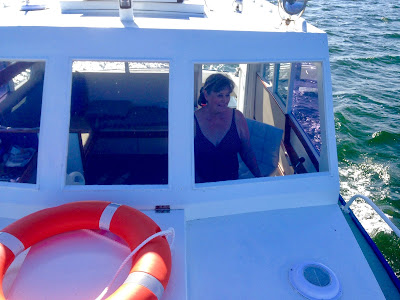 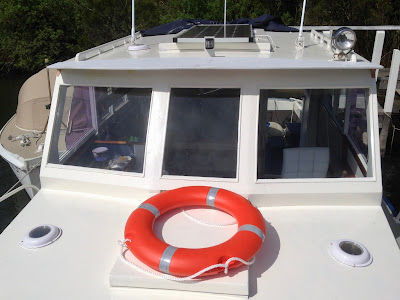 The visor having it's final dry fit. 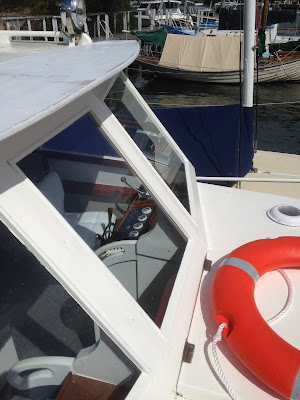 Posted by robert.ditterich at 5:38 PM 4 comments:

Ice Letters. A review of the novel

Ice Letters by Susan Errington
My rating: 4 of 5 stars

Loss, longing and a feeling of being adrift in a sea of helplessness pervade this charming story set in Australia and The Antarctic during the first World War. The moral dilemmas confronting humanitarian and thoughtful people are particularly pertinent now. We don't often read about the pacifists of the era, nor of the more extreme elements pushing for a new socialist world order, but however these movements ultimately evolved, ordinary people of good will were carried along with them in a wave of hope simply because they could not accept the path chosen by their own governments.

This is a beautifully written story on several levels. The personal journeys of two people in particular are set in a challenging and very interesting context.

Posted by robert.ditterich at 3:14 PM No comments:

the edges of things 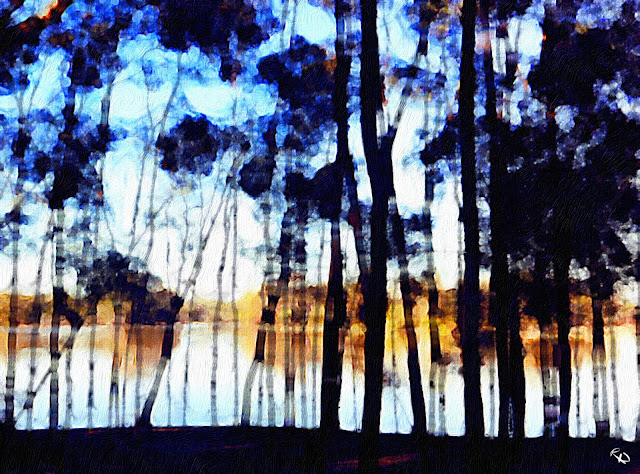 The most productive places are sometimes also the most interesting. When we think of a landscape we often picture the spaces and the expanses, and while these provide the tone or the texture to our image, it is to the edges that I am constantly drawn and these are often the most productive too. It is  called the 'edge effect', where energy or diversity is concentrated and systems become more complex and productive. Bill Mollison used the power of this effect elaborately and extensively in his  invention and application of Permaculture principles in 'edible landscapes'. 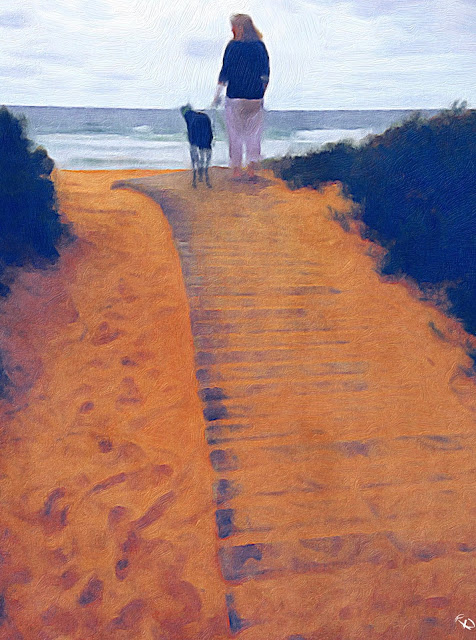 Edges provide perspective. When we are on water, we look landward. When we are on land some of us seek  places from which to look out over water. Water reflects and  is reflective also in the sense that it allows us the distance to consider. 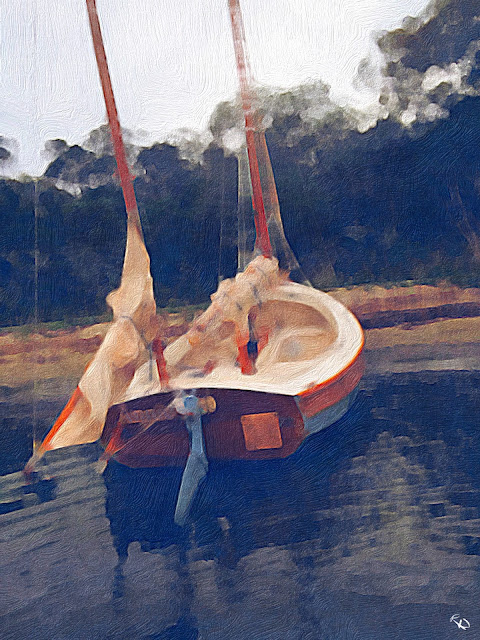 A thing can seem more delightfully real when edges are emphasised- perhaps by increasing the tonal difference between surfaces. A subject can be made more beautiful by softening edges that distract from those which are essential. In abstraction, sometimes the edges become the subject and remain beautiful without being elaborated by reference to things as they appear to be.

Cultural diversity creates energy at the edges too. It always has. The greatest cities, trade routes and ports have always generated excitement, energy and productivity because of the interaction of contrasting cultures- which may be homogenous at their centres, but porous at the edges.

The images here are digitally modified photographs.
Posted by robert.ditterich at 2:27 PM 2 comments: