A 'Couta Boat on the lakes 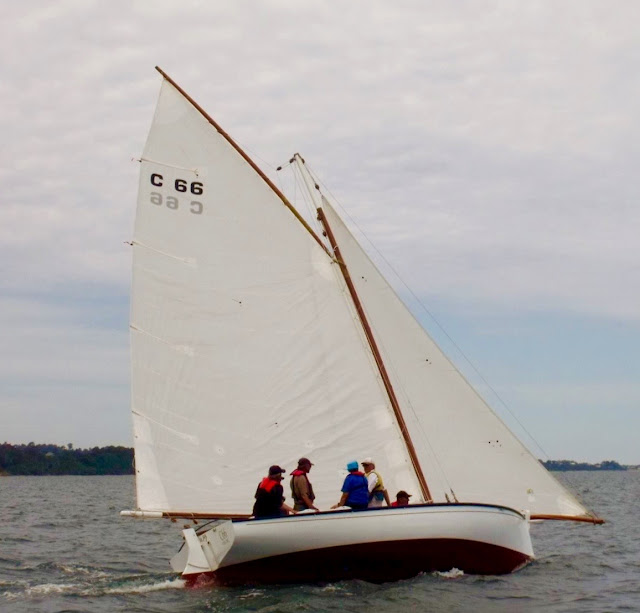 Peter Medling of Paynesville came up with this picture of 'Pearl' built by Mitch Lacco in 1926 with a NZ Kauri hull and Queensland Beech decks. She was recently purchased and brought to the Lakes from Port Philip, I think...but I'll need to do a bit more digging for the details.

She is a powerful hull. Five up on the rails seem insubstantial. I am quite intimidated by the overhang of the boom! 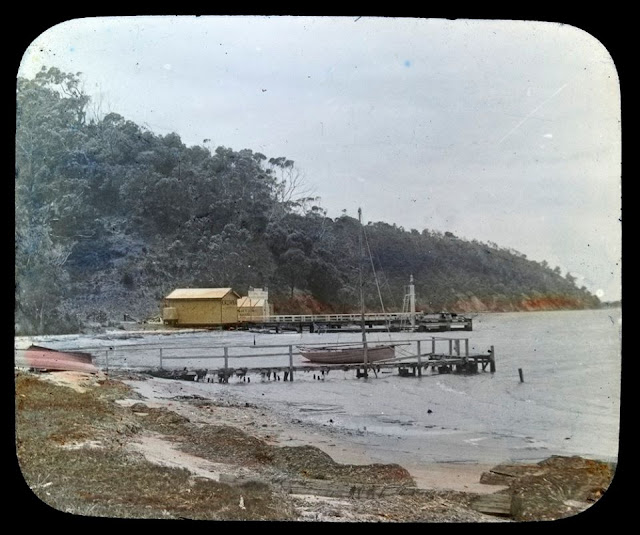 I also include this pic from the early 20th Century of the jetty at Kalimna. The boat there is reputedly the one belonging to a well-known Melbourne business family, but it bears an uncanny resemblance to Beachcomber, whose origins and maker are still a bit obscure, despite lots of information.

I recently spoke to a man whose lineage goes way back in this district and he claims that his ancestor was a likely builder of Beachcomber in the traditions of the French Canadian boats he learnt his trade upon before coming down to Oz. His name was MacMillan (a branch apparently unrelated to the explorer and pioneer in this area who has a very disturbing and unhappy reputation in his dealings with the local indigenous people ), and I'll be interested to find out more about him because the previous most likely builder has working dates that don't quite match Beachcomber's given history.

I keep an open mind on these things but glean anything I can by making these claims online and at dinners, and seeing what comes up...
Posted by robert.ditterich at 3:01 AM No comments: 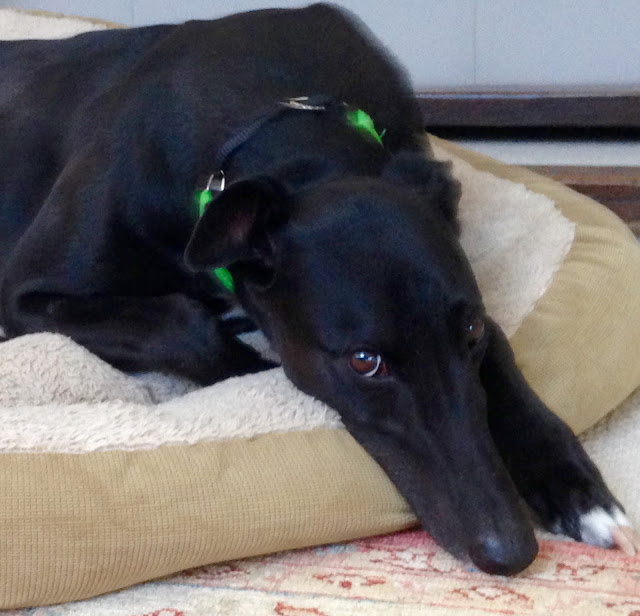 This remarkable creature is new to the family, and while I'm more than happy to share my pleasure in having his companionship, the reason I'm including him here is somewhat more complex.

He is three and a half years old,  a former racing greyhound, and having survived four trainers and a short career- including his share of wins- he was taken to a vet to be euthanised, like thousands of similar dogs around the world, when they have 'served' what is seen to be 'their purpose'.

This magnificent animal is such good company.  He is solid and uncomplicated and calm despite his great physicality. The reason he wasn't killed by the vet is that he was rescued by a local group who make it their business to find good homes for retired racing dogs, and many wonderful relationships have come from their efforts. Vets are often overcome by the wastefulness of these destructions and are happy to have an organisation to call. We offered to foster him for them until a 'forever home' could be found, but I became too attached to let him go without a struggle.

We have watched as he has become used to us, and we him. He is now rediscovering his playful puppy-self, and finding time to dwell a little on the joy of just being. It has taken a few weeks for us to understand his particular needs, his never having lived in a home before nor had the sort of affection that a pet might expect from people. These are a bit different from other dogs, but they are full of pleasant surprises. People expect them to need a huge amount of space and exercise, but they don't. People assume that they are dangerous because they are big and muscular, but they aren't.

Some might assume that they are 'industrialised' and incapable of domestication, but they are intelligent and adaptable, and they are very quick to recognise a calm and happy environment and give out much more emotionally than they expect in return.

Everyone wants to pat Sooty when we walk him. He is a great ambassador for the breed. Currently he is helping us foster a frightened, timid little female  also rescued from a wasteful end. She has made very quick progress into some sort of confidence and will make someone an affectionate and loyal companion too, and our Sooty will have been a part of her initial re-education from an industry that seems unforgivably wasteful to me.

His racing name was Pod's Elect, and the video below is of one of his better races.
A disclaimer. I have never been to the dog or horse races and I don't support the idea of racing animals. (But watch him come from behind. He is in the red jumper, no.1)

Posted by robert.ditterich at 11:10 PM 4 comments: