All dressed up and nowhere to go. I had undertaken to have the instrument ready for this Friday (the client's birthday) and despite a slow patch back there, everything seemed to be coming together on time and on budget.
The tip from Rick to get beautiful sharping levers from Betty Truitt allowed me to 'meet' another passionate and energetic advocate for her craft. Betty markets harp gear in general, but her patent levers not only seem to be of exceptional design, they look great too. Her bundle of hardware, including bridge pins, eyelets, reamers, tuning pegs and levers arrived within four days of her order being sent from the good old US of A. All beautifully packed and labelled. Great service and wonderful attention to detail.

I felt it prudent to find a good supplier of strings within Australia, because the harp will need replacements from time to time, but my enquiry, order and payment from early last week has not born fruit yet. So the harp sits waiting. I should have ordered earlier, of course, but everything else just seemed to happen as if by magic, and I was  so focussed on finishing each little detail I didn't get my head around the niceties of which string at what thickness over what length, wrapped in whatever wrapping, by whichever manufacturer.

The problem is that the levers can't go on until the strings have settled in and the instrument has relaxed into a new, musical shape. 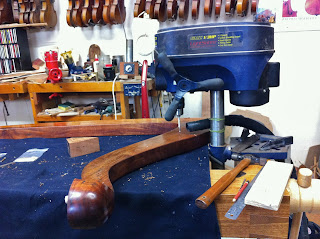 Finishing the woodwork before fitting the hardware necessitated careful handling during the drilling process. Here the bench has been made into an extension table for the little drill press by clamping the press in the end vise, checking for square carefully. It worked a treat and was a comfortable process, if a little tedious! 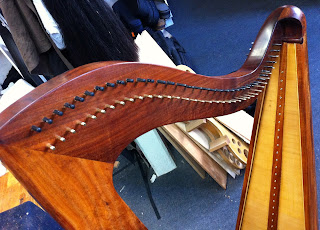 Fitting the pegs was more challenging than I had anticipated because unlike violin pegs, these are steel and cannot be adjusted like the hole can, so neat lengths were not easy. 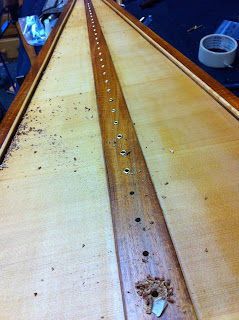 The string holes along the soundboard are reinforced with brass eyelets.

Posted by robert.ditterich at 6:19 PM 5 comments: 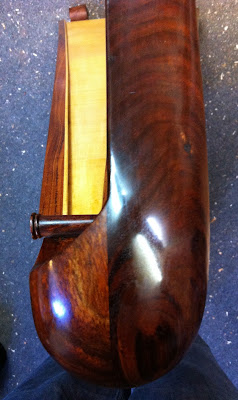 These pics cover the polishing and finally assembly in readiness for the fit-out. The bottom of the pillar has been bolted to the soundboard to test angles and fits. The neck and soundboard will still need to be drilled for the bridge pins, tuning pegs, sharping levers and string eyelets. These holes could have been done before oiling but since the hardware isn't here yet, I pushed on regardless.

The wooden peg shown above is not a functional thing- if anything it is a design affectation, and my attempt to make the joint between neck and soundbox look better by providing a point of emphasis where the strong taper and converging lines of the soundbox suddenly intersect with the round knob of the the neck base. I tried a few different shapes there and ultimately felt that a peg worked best to allow the neck curves to sprout happily from the box. 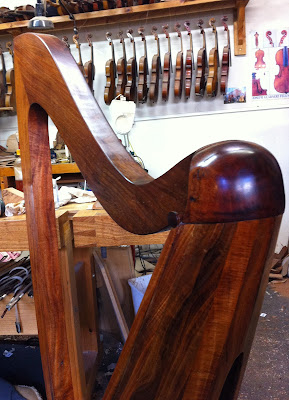 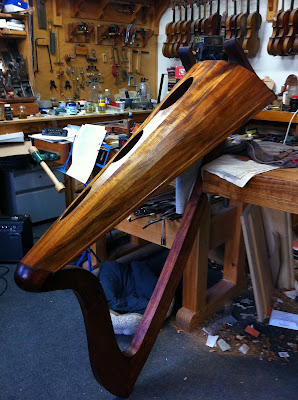 Here the whole caboodle is propped in the shoulder vise to access the base for the spanner job on the lag bolt. You can see from these pics that the timber changes color a lot when light or angles are changed. This is because of the very strong grain, but it isn't as obvious in reality as it is in photos. 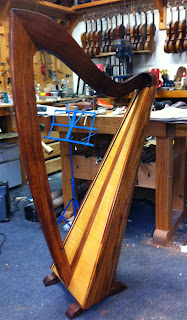 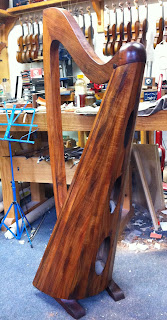 Posted by robert.ditterich at 4:34 PM 2 comments:

a bit of good oil 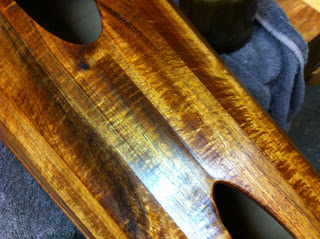 I chose to use boiled Linseed oil as a base, without using fillers to hide timber 'features' and small areas of tear-out. I can't explain why, but it is quite liberating to be free of the traditional restrictions that dictate how a violin should look. This instrument will allow the actual tree to have a bit of ego in the presence of the harp. These pics are of the process of oiling. 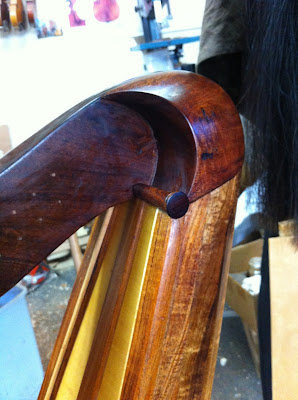 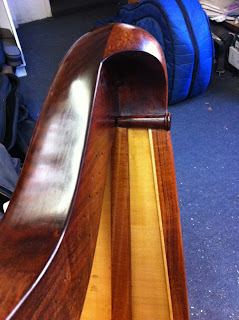 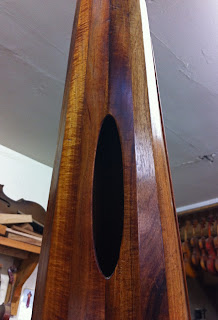 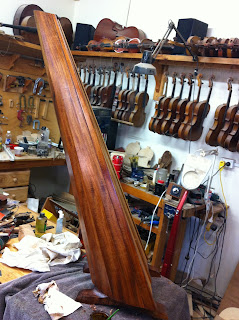 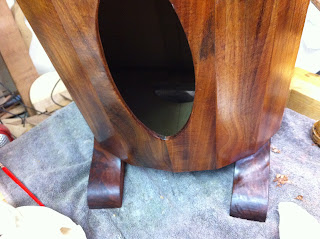 Posted by robert.ditterich at 11:19 PM 5 comments:

back to the harp 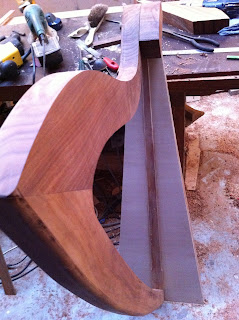 This is a bit of a catch up post, having spent many hours in the 'zone', attending to surfaces more than shapes, but looking below at the oversized lump at the top of the soundbox, there has been a bit of sculpture going on. 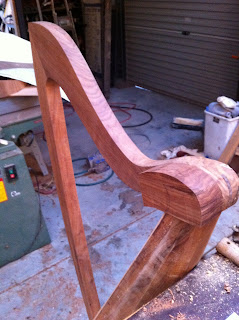 The bulb at the base of the neck was an intimidating project in itself- one of those little jobs that presents more problems in the mind before you actually tackle it, and then it simply becomes a satisfying flurry of woodchips and right-brain flow, sawdust and feeling the shape with very sharp tools, and with a bit of luck and/or experience, you know just when to stop. 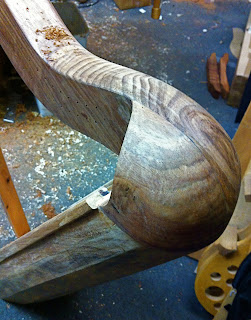 The soundboard is glued onto the box, and then secured with covering strips which are themselves glued and screwed...and these are covered with thin strips of matching wood to cover the screws. 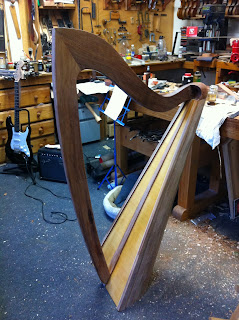 Creating the final surfaces for the fit of the neck and pillar to the soundbox is a job best crept up upon rather than attacked with bravado. Rick recommends leaving a small allowance for the movement of the neck wood after compression by the strings, and I have done that, but I needed to be very careful that the slight gap was even enough for the surfaces to bed down without any sideways twist. At this point the top joint is held in position by a pair of positioning dowels, and the bottom joint is just hanging there. When all is well-placed, the bottom end will be secured by a stout coach screw into the base.

It looks as though this instrument will be finished with oil in the timber, rather than coatings over the top. The surface will be less perfect in that wood flaws and surface variations won't be masked, but the timber itself has such authority and integrity I'm not sure I have the will to wrap it. The exception to this is the sound-board, which has had a couple of sealing coats of shellac. Softwoods can look gooey if oiled, and have been known to drink far too much.
Posted by robert.ditterich at 3:33 AM 5 comments: