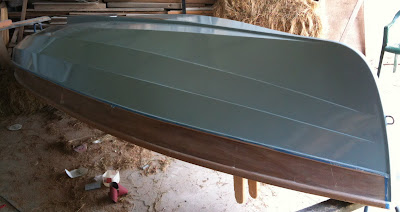 Here's 'Annie' with some top coat on, but the video that I wanted to show of some blissful moments in our other boat apparently don't want to be uploaded to blogger. There is a low res version on flickr for those interested. I had hoped to add some sailing to brighten the day for those frozen inside their houses, but not yet it seems.

As well as the hull paint, the spars are progressing nicely, and I'm tempted to finish them with the plane, imperfections and all, because it is such a nice surface without yucky abrasive paper. I never use sandpaper on a violin, but that is a much smaller-scaled object to plane and scrape. We'll see how they turn out.

The Waller is such a lovely boat to sail with three competent crew. She just loves the weight and the multiple hands to the task, and sailing her with family lined up in the cockpit is such a joy.
Posted by robert.ditterich at 12:25 AM 3 comments:

Such is the empathy that Australia feels for those northern countries currently frozen and blizzarded (!), we have had a foot of snow falling in our 'Alpine' areas this week, in Summer. Where normally, I would be escaping the heat and self-medicating in the long hot evening with a measured, controlled and manageable quantity of beer, instead I am now enjoying something red and much more hearty. A Merlot from New Zealand actually- and I have to say it is quite different from Australian Merlot, more akin to our Cabernet, or even maybe some of the softer shirazes with lovely colour and long complicated flavours. It's from Oyster bay in NZ.
This summer we have been under the influence of some hot air generated over near South America that has generated what is called a 'la Nina ' pattern, bringing tropical moisture right down the eastern coast to Victoria, and quite exceptional rainfall. After more than a decade of drought, in part because of the effects of the opposite South American phenomenon, the 'El Nino' which seems to have been a regular visitor since the 1990's, we are reveling in the rain, but some crops are ruined again in the process. Some communities are flooded too. And when we get a change, the Southerly brings an icy blast from Antarctica, and Winter conditions in Summer.
The upshot is (for the purposes of this blog, anyway) that my paint is not drying on the hull, and I'm drinking winter wine, and the shed fairies that might have dried the paint are off helping Santa, although I heard a rumour their flights north have been cancelled, so why the hell haven't they stayed in my shed?
So Steve, I can't compete with the splendid photos of a white Christmas in Plymouth, but we are doing our best to get cold in sympathy.
Posted by robert.ditterich at 12:56 AM 2 comments:

A little blog site for the new book.... 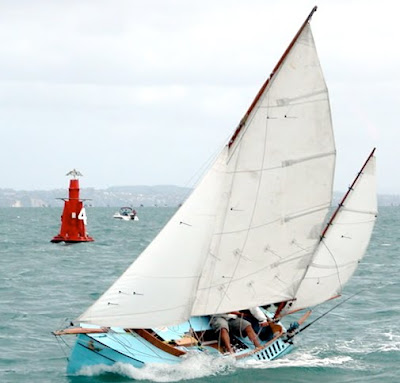 'Something About Navigator' has its own little blog site now, to enable specific feed-back and communicate any items of related interest, and to provide a place to purchase copies on-line.
The site can be found here.
The boat, above is of Dave Perillo at the helm of a rampant and quite hormonal 'Jaunty', going somewhere quite quickly...
Posted by robert.ditterich at 3:34 PM 2 comments: 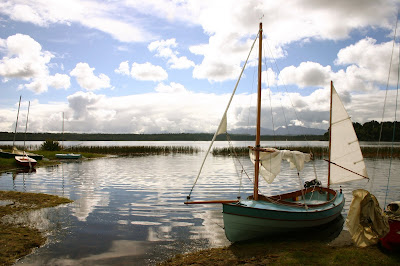 Amazon have listed the books on line. The color edition of Something About Navigator can be found here and the monochrome edition, here. Or a search with the title will also find them.

I should point out that bundles of ten books, tied to-gether with string will make a brilliant door-stop, and copies epoxied edge to edge would make a very decorative floor.

Recent research shows that nine out of ten doctors surveyed recommend reading this book as a cure for insomnia, and world conflict. Reading this book instead of watching TV will reduce your carbon footprint, and it will cost you less than taking your family to a hotel for a meal.

Even if you can't read, looking at the pictures will have the same effect as long-term use of Prozac, but with fewer side effects. Further, the author of this post sometimes exaggerates things. A bit.
Posted by robert.ditterich at 2:21 PM 6 comments: 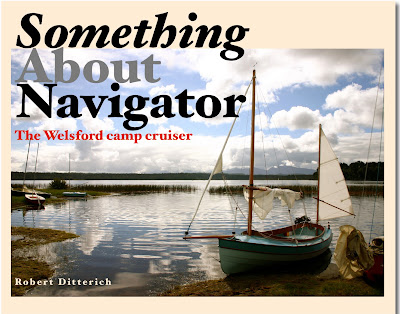 There are two different editions of 'Something About Navigator' available now through one sales channel, with others becoming available soon. The original plan was to make the book as affordable as possible, by keeping production costs low, using a print on demand process, and monochrome printing in the USA on modest paper. I have done that, and it is available at @ $20USD (The 'black and white edition').

But following some encouraging feed-back, I have also produced a more expensive edition that is printed on better paper and with mainly coloured illustrations, in other words, a printed version of the color PDF that will also be for sale later. It is available for $42 USD. This is definitely a more attractive book, but obviously more than twice the price.

Chuck at Duckworks has said that copies will ultimately be available through his online shop, ands I'm a bit unclear how that will be managed, but I think an order from Duckworks will be filled by me and drop-shipped straight to the customer from the printer.

In the next few weeks the book will also come online at Amazon.com, and I'll put up a link when that happens.

In the meantime, it seems that the best way for me to sell the book is by the direct link to my Createspace e-store here for the color edition, or here for the black and white one. ( I have to say that my little 'cut' is much more respectable with this sales channel than an Amazon purchase will be)

This is a very low-key sort of book launch, just me and my computer, but I really need to mention some of the people that made writing this thing so much fun, and who have given their stories to the book.

The book gives a bit of an outline of the development of the design, and a bit of an analysis of the things that maybe have made it such a happy and successful boat enjoyed in so many ways, in so many places, then there are some stories by Navigator owners and sailors and some builders. After that there is a bit of writing about the whole building a boat thing, and a chapter about building a hull. Following this there is a bit of detail about fittings. Finally there is a concise list of resources for enthusiasts to follow up. Those of you reading this on my blog will probably have already spotted those....

The other voices though were given so generously and with such a co-operative and helpful spirit, and the essays they contributed lift this little book off the page and out yonder onto the water. There are some great photos too, although in striving for an economical product I haven't done them their due justice. In no particular order, Steve Parke, Owen Sinclair, Richard Schmidt, John Welsford, Chuck Leinweber, Kevin Brennan, Martin Welby, Dave Perillo, Dave Johnstone Barrett Faneuf and others all made the process an absolute delight and I thank them most sincerely for listening to my idea and jumping in without hesitation to support it.

It is my sincere hope that this little book will give some pleasure, not only to Navigator enthusiasts, but to dreamers, builders and sailors who just want something simple, real, and creative in their lives and who find that thinking about little boats is helpful and maybe even inspirational in all that.
Posted by robert.ditterich at 12:27 AM 4 comments:

Email ThisBlogThis!Share to TwitterShare to FacebookShare to Pinterest
Labels: book, navigator book, Something About Navigator

Plan B and the rubbing strip. 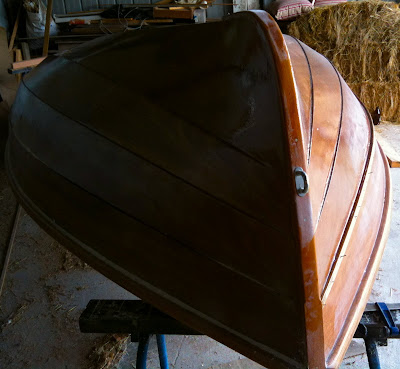 A great week-end for epoxy, despite the odd bit of tropical rain, I managed two lots of double- wet-on wet coatings for the hull, embedding then covering the fibreglass matting. The wood looks delicious....

Months ago, I decided that I wouldn't add a lower rubbing strake, figuring that I liked the contours without them, but also realising that these things seemed to exaggerate any unfairness in the sheer and the top board. Then, after epoxying the hull, my normal infatuation with the various colours of timber kicked in, and I started fantasising about varnishing the hull- which, after all, would be facing down, away from the sun most of the time. The next step in the process of thinking this through was to remember how nasty the Ozzie sun can be and how enthusiastic most woods are to turn grey from exposure, unlike people, who turn red. I didn't want to have the first boat with a melanoma, so I started thinking that maybe the top strake could stay woody (despite the fact that I made no effort to choose the prettiest boards or take any particular care in the board joints)....but that required a lower rubbing strip. So, plan B it is. 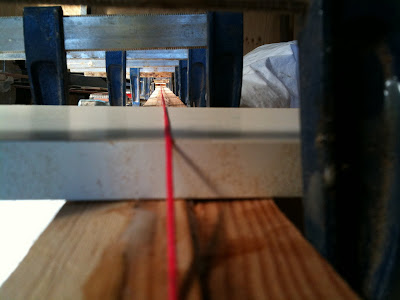 The spars are a lovely bit of work to do, and so far there is a mast, a main boom and above, the mizzen glue-up has been done. Because this is a thinner spar, I took extra care in laying it out straight, even clamping along a straight edge and using a stringline, but I have to say the fairies got into my shed overnight and just gave it a 2-3mm kick to one side over the 3.6 metre length. I can accommodate this though because I made the material a little thicker for the glue-up, and the taper can be off-set a tiny bit to compensate for the bend. I still need to glue the yard and gaff jaw pieces, do a heap of rounding, and then the mizzen boom and boomkin. Rudder, foil and tiller bits are sort of organising themselves while the spars are happening.
Posted by robert.ditterich at 2:42 PM 10 comments: