the buzz and the box 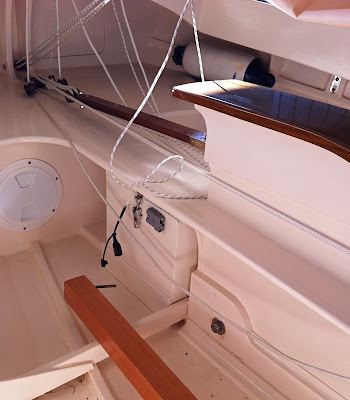 This is to detail the installation of the electric drive after a very satisfactory first trial. The pic above shows the battery box, which is simply held captive by slotting over the keelson, and held fast when the lid is slid over the box and the catches engaged. The grey plug is an 'Anderson plug' and is an easy way to disconnect the battery. Behind that is a black plug (with waterproof cap) into which the battery charger is plugged. In our case, that battery charger is powered by homegrown solar electricity from our ten year old household power plant. There are various additions and refinements possible here, but I'm keen to keep things as simple as possible.

Incidentally, the wooden thing there is the boomkin in repose after its first outing. 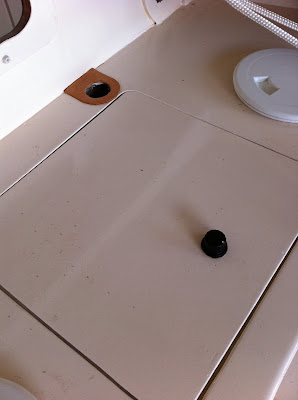 This complicated pic shows the control for the motor. When the knob faces forward the system is off. Turning it to the right gives a range of forward speeds, and turning to the left makes you go backwards. This is so much more fun than an outboard, and so incredibly easy to control.

What this system won't do is completely replace an outboard because battery range will always be a limiting factor without considerable weight and expense. But if you often launch from a marina, or simply want to explore a non-sailable stretch of creek or river, then this will be easier, quieter and much more fun than a stinky thing.

Now a small confession. The system as shown does not use the electronic components discussed in the previous post called 'power resistor versus mamba max'- it uses the resistor supplied with the motor, under that knob. The reasons are that I was quite concerned about the small scale electronic wires and connections in a wet, corrosive and hostile environment (managed by an incompetent with big hands and less than perfect eyesight). The consequences are that I won't get the efficiency that I had hoped for, but that simply translates into running time, and if that becomes an issue I can simply carry a second battery.

The major surprise in using this system was the positivity felt in controlling the boat. Because you don't need to 'start' the motor, or reach back to change from forward to reverse, and because the drive is in front of the rudder (and not going to cut great chunks out of it) the rudder is very effective under power; I can place the boat accurately and confidently. I've never felt that before with an outboard. I also felt more confident in approaching the marina because I knew that reverse was so easy to go to from the forward position.

As I expected, the motor compartment carries about 20mm of water, but this is easily drained, and it just requires that the motor wires are well (triple in my case) insulated. The waterline will be a little lower when the outboard isn't pulling down the stern too- particularly since mine is overpowered and weighted at 5hp. 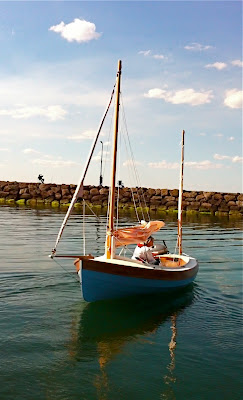 Posted by robert.ditterich at 2:55 AM