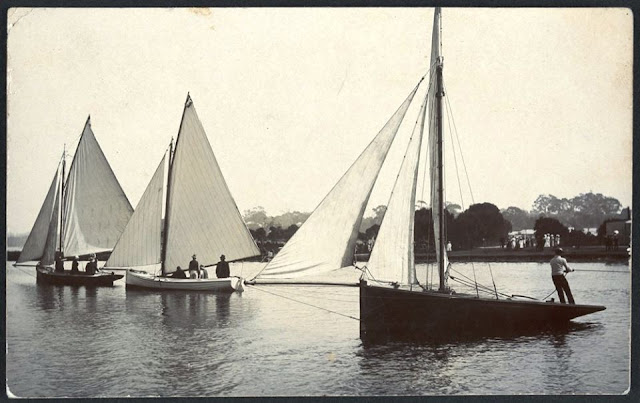 Three gaffers, each of quite different form on Gippsland lakes in the early Twentieth Century. Their names were The Wanderer (with a very shallow transom and a cutter style rig), The Flying Scud (with a transom that is shaped in a way more common in recent times and a simpler rig. She has lapstrake planking) and the Marjorie (with what appears to be a counter stern). Only the canoe stern type is missing from the mix.

It seems that the local builders adapted several 'old country' styles to the shallow waters of these lakes in the early more isolated times, but the later builds were then also influenced by the builders of Port Phillip when it became more common to bring boats into the area.

The typical 'couta boat' of the Melbourne/Geelong/Mornington/Bellarine areas evolved with heavier deeper keels to venture off-shore, while the Gippsland types that kept local traditions alive persisted with centre-boards to make unloading the catch easier on a beach. The counter stern became less common in time, but the canoe stern persisted along with the conventional transomed types and are still scattered amongst the berths and pens of the areas around Lakes Entrance, Metung and Paynesville.
Posted by robert.ditterich at 1:26 PM No comments: