Rebirth of a Lakes Classic from 1936 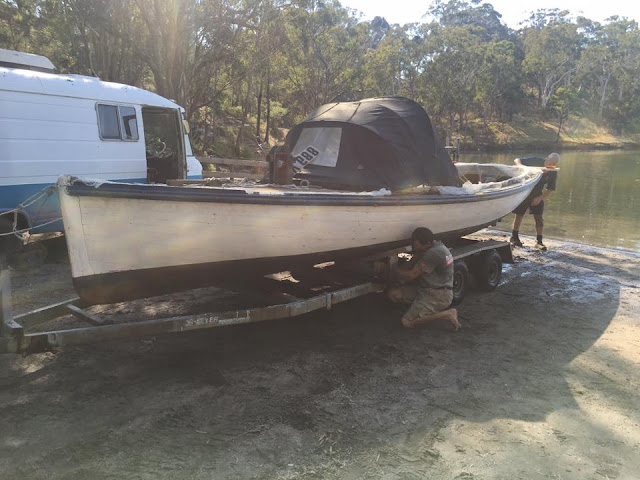 There is something about the Gippsland type fishing boat that rings my bells. I'm not alone here...
Although different builders varied the type considerably over the years (as documented in previous posts here), there was a convergence in the years between world wars when certain attributes became almost fixed to create a distinct local character.

There remain  on the lakes a good number that have outlived the great days of commercial fishing and there are many families for whom this type of boat provided work on the water across several generations. Some of the boats are working evidence of family and local histories and this boat is one of them.

The boat has recently been rescued and purchased by Peter Medling, a fourth generation fisherman from Paynesville.

Peter said; 'Built in 1936 for Jack and George Smith and used as a professional Fishing Boat for many decades. My brother Ray Medling bought her in 70s and fished out of her for nearly 20 years . I also worked out of her for many years as well. Rob Morecroft also used her for fishing. Rick Cove who was married to the daughter of the original owners the Smiths then bought her back...He contacted me this year and I was keen to buy a piece of our family fishing history back as my fathers boat is unrepairable. We will totally restore her and will have her raced tuned for the next fishing boat race at the Rally. She will be renamed to the Nancy Jean to honour my mum. JGS will still be written on her stern I have been lucky enough to score the rudder off my dads boat so that will be fitted also to complete the family connection. So with a little luck another one of our great old classic boats will be saved!'

Rick Cove has contributed some of the boat's history, he wrote to Peter;
'I purchased her from Robert Morecroft about 1985 and with the help of Rob Ashworth got her seaworthy and back into the water. Robert Morecroft had just raised her from a watery grave in Raymond Island bight but she was too much work for him so I bought her for the same reasons you did. To get her back into the family. I worked at the Paynesville Slipyard where Rob Ashworth and I spent many many hours rebuilding her. I went to work in her each day for about 14 years. In 1998 I was in hospital for a back operation and got news that she had sunk. Friends raised her but the Mazda 323 engine was not able to be used again. My crook back stopped me being able to use her and from about 1998 she was kept for the family. We moved her to Duck Arm when I sold up in Paynesville in 2007. She has always been regularly slipped and anti-fouled at the Paynesville Slip. There was only growth on the keel cooling pipes when you pulled her out. The original cost when she was built in Paynesville in 1936 by Robinson, ( on the corner of King Street and Langford Parade), was 90 Guineas. (94pounds 10 shillings or $189.00) The original receipt is still around in the family somewhere and I will try to get it for you or at least a copy. It is great to see that you are getting stuck into her.' 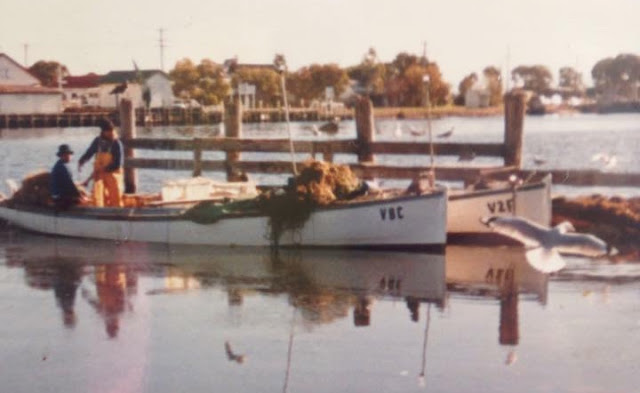 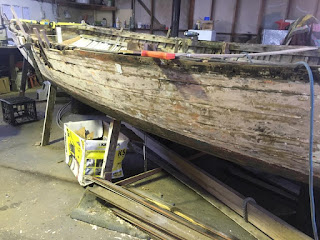 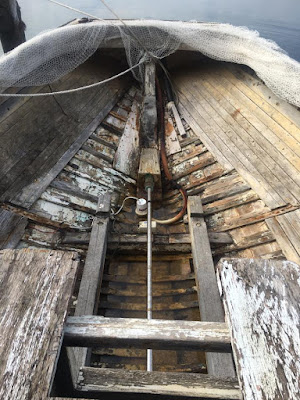 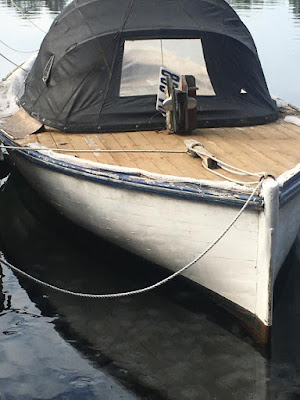 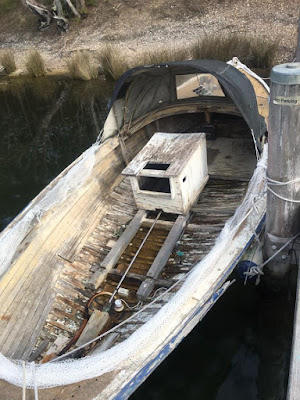 Peter has begun the restoration, replacing and sistering ribs and plank pieces and is currently replacing the deck with reclaimed kauri planking with the assistance of Bob Benton. I hope to post on her progress and completion. 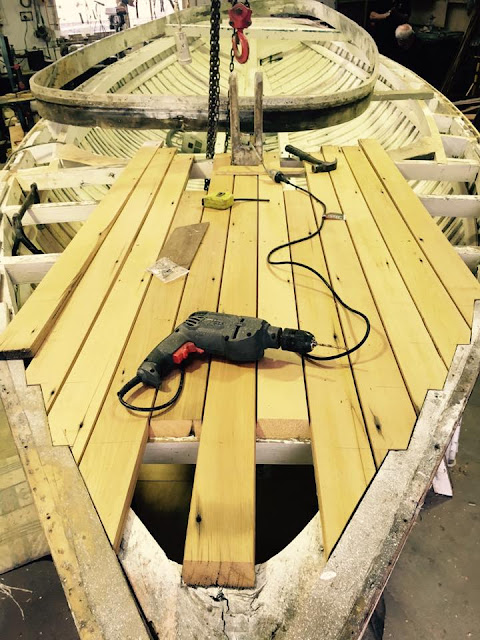 Posted by robert.ditterich at 5:24 PM No comments:

what is it about lines? 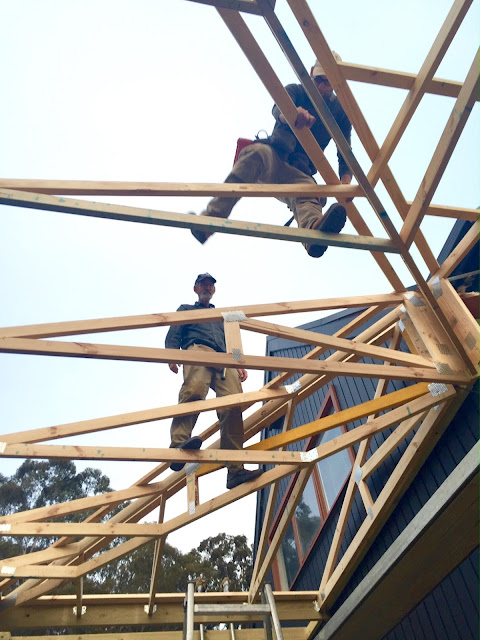 Some obscure thing in my childhood must be responsible for my appetite for nice lines. I've never been a builder of any merit, but I have had so much joy over the years drawing lines to create a space, and then getting outside to make them real lines drawn against sky. If I'm honest, these things interest me much more than fitting out or even using a building. What I love is the transformation of space by considered lines and I feel rather blessed that the old body can still enjoy  days in the sun 'on the tools'.

There are a few persistent themes in this blog, and line is one of them. I vividly remember a walk with my father when I was less than four years old, through a street in our Victorian country town of Horsham where we lived,  less than ten years after the Second War. On this walk I saw my first house frame being built and the sense of transformative wonder has never left me. I raced home and stole all Dad's garden stakes and tried to create something equivalent in the garden. I had a parallel experience the same year at our local swimming hole at Green Lake, where I saw my first boat- with the same attempt at re-creation when I got home. Every chance since then, I've been up to the same mischief, but never as a professional. It was violins that allowed me to be paid for making nice lines, and I'm missing them a bit lately.

I have a grandson reaching the age that I was when these things shook me. I bet a few readers might have grandchildren too. I hope some of them are as aroused by the possibilities of making things as some of us were. Taking an idea from paper to the vastness of the outdoors, and being encouraged to do so can set  the mind up to be forever looking to see the 'what if' in life instead of the 'I can't'.
Posted by robert.ditterich at 4:57 AM 2 comments: