Some details of Beachcomber 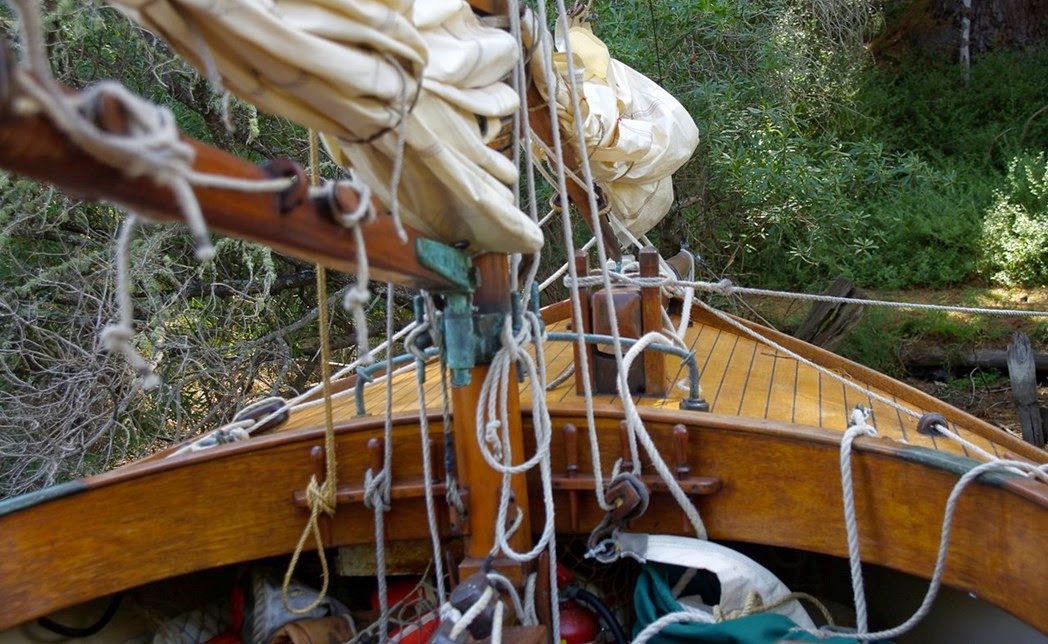 We'll include some more details about Beachcomber here, bearing in mind that she is still a long way from us and we only had one photo session so far. The upper pic shows white beech decking, Merbau combing and belaying pins, oregon mast (of incredibly fine grain). 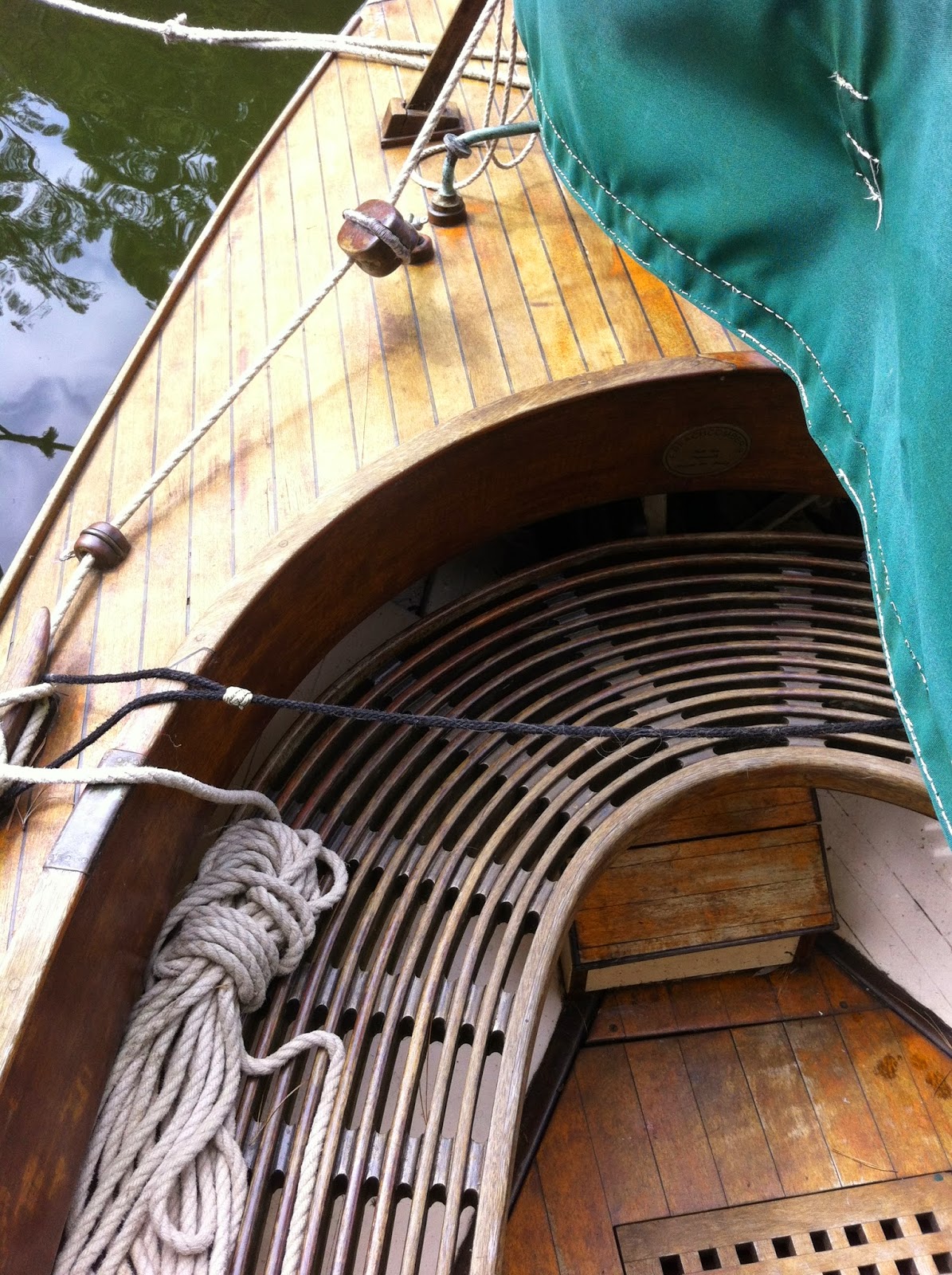 Sitting at the helm is a delight. The restorer, Fred Herbert made wonderful use of his skills as well as those of some of the most talented local lakes shipwrights in detailing the project. The timber has not had its annual attention this year and is beginning to look a bit tired. I will try to protect it without removing too much of the patina. 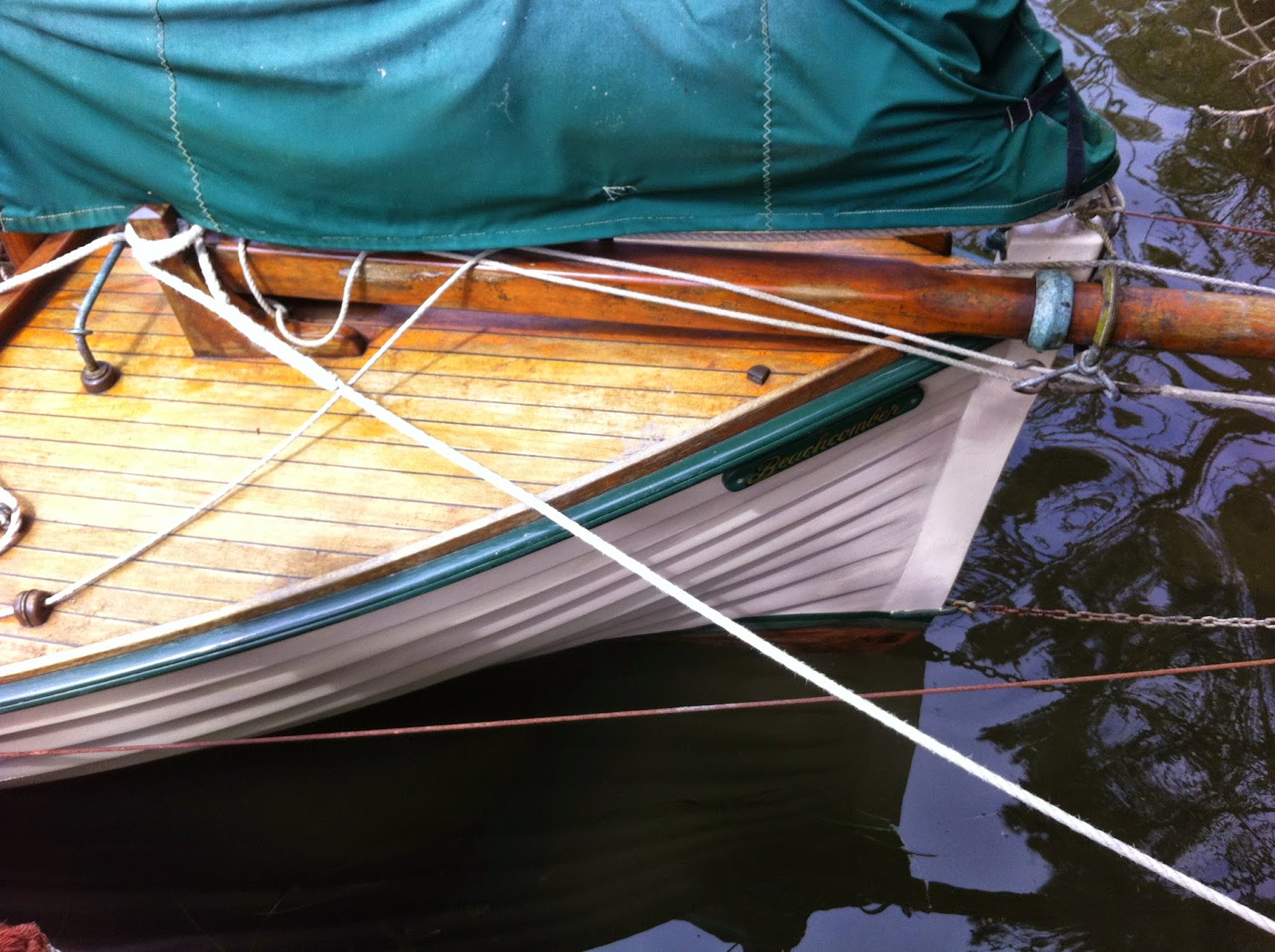 The boat was locally built somewhere between 1860 and 1870 to be the supply boat for an isolated station (big farm) on Whale Head. The maker was probably English and believed to be named Tierney. The design of the boat owes absolutely nothing to local traditions as it pre-dates the typical Gippsland fishing boats designed for the Lakes and other 'Couta Boat' styles which generally were developed later for deeper water elsewhere in Victoria. Fred has some wonderful details of her history, even photos of the boat in the 1940's, when it had already been called Beachcomber for seventy-odd years. 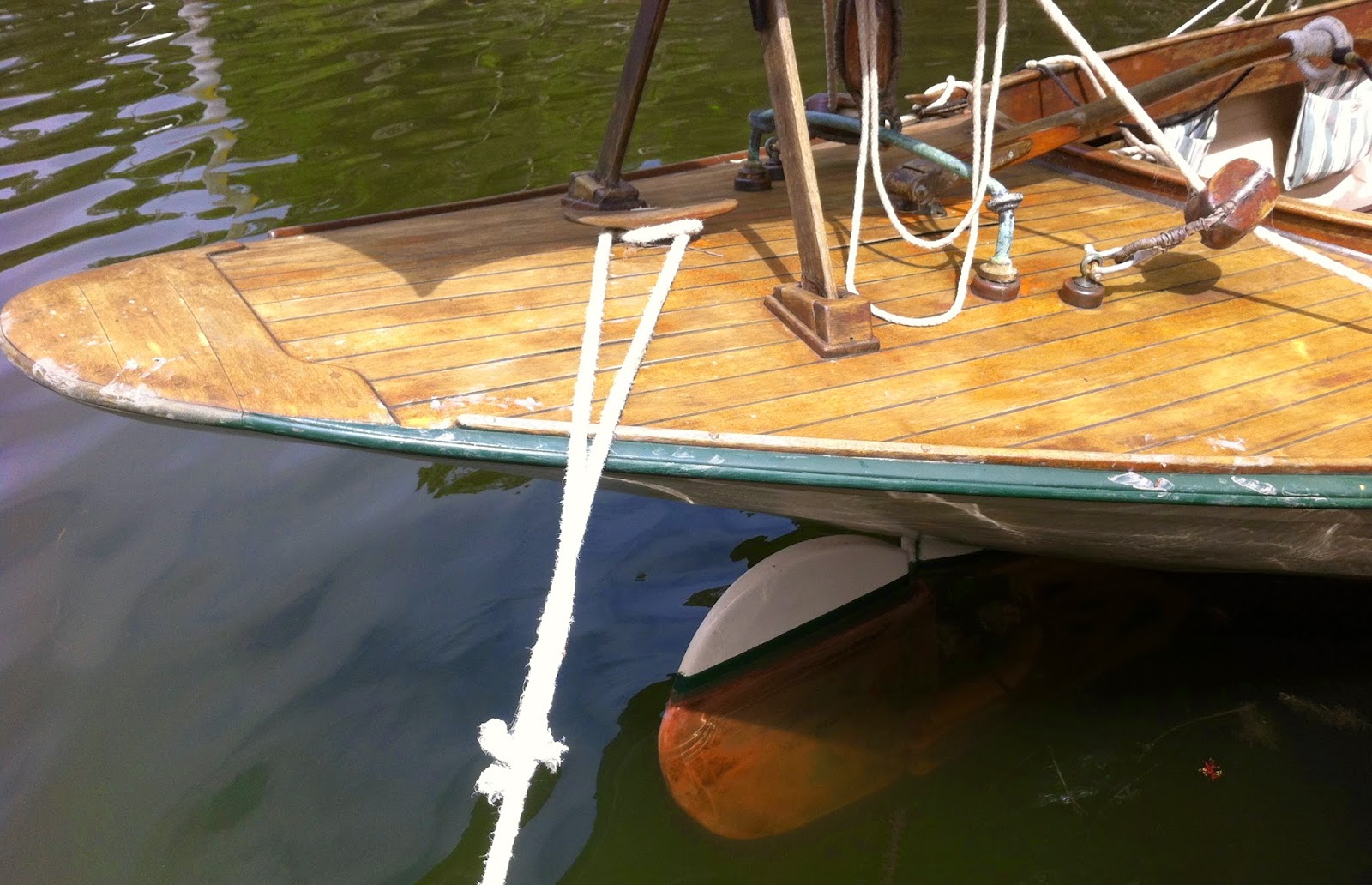 The counter stern has the effect of emphasising the curve of the sheer line. She is very sweet from all angles.

She does have a 10hp Yanmar diesel on board, supported by twin batteries. The centre plate is of boilerplate iron encapsulated in epoxy. The hull timbers are the original New Zealand Kauri boards, except for the sheerstrake which was new Kauri in 1992. She was re-ribbed in local Eucalyptus hardwood at the same time. Doryman, I confess that although there is a hand powered bilge pump, there is also an auto electric one that discharges into the CB well.

She draws about two and a half feet and is twenty-four feet on deck. The blocks are all hand made and all fittings are either copper, galvanised or bronze including the standing rigging (galvanised and possibly in need of replacement) The running rigging is all natural fibre too, and I'm not sure that I'll be able to maintain this level of purity! The gaff jaws have only ever been lubricated with real tallow. In addition to the penny placed under the mast, there are silver coins of the realm on every wooden block, but don't tell the Queen.
Posted by robert.ditterich at 1:52 AM 4 comments: 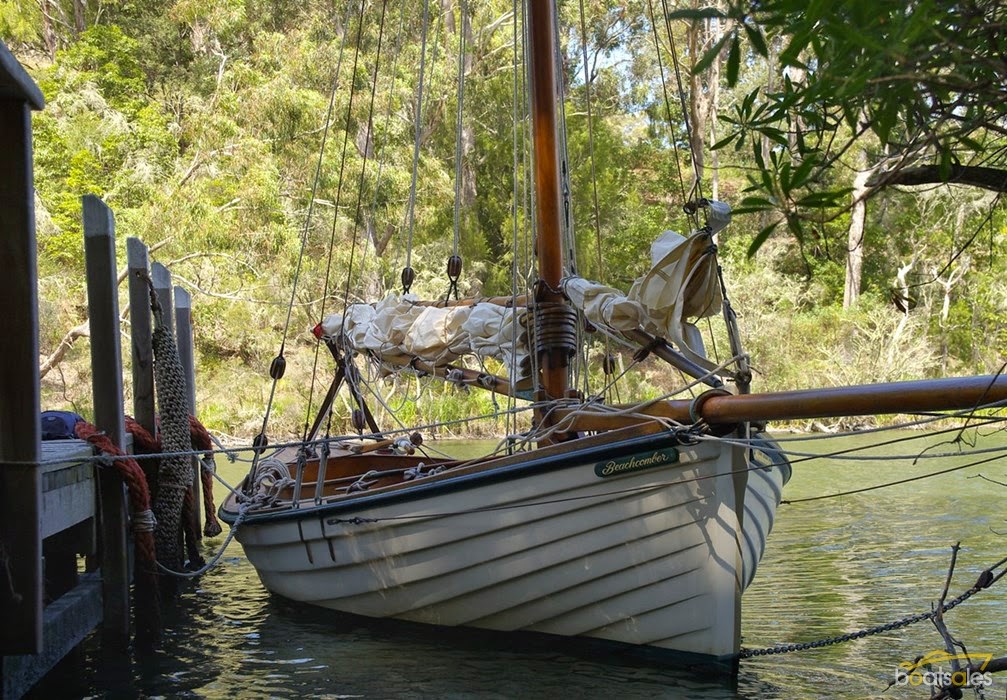 I would like to introduce Beachcomber to both my remaining readers. At this point she is about half ours (although she is so old we regard ourselves as custodians rather than owners), as we tidy up the details of registration and insurance. 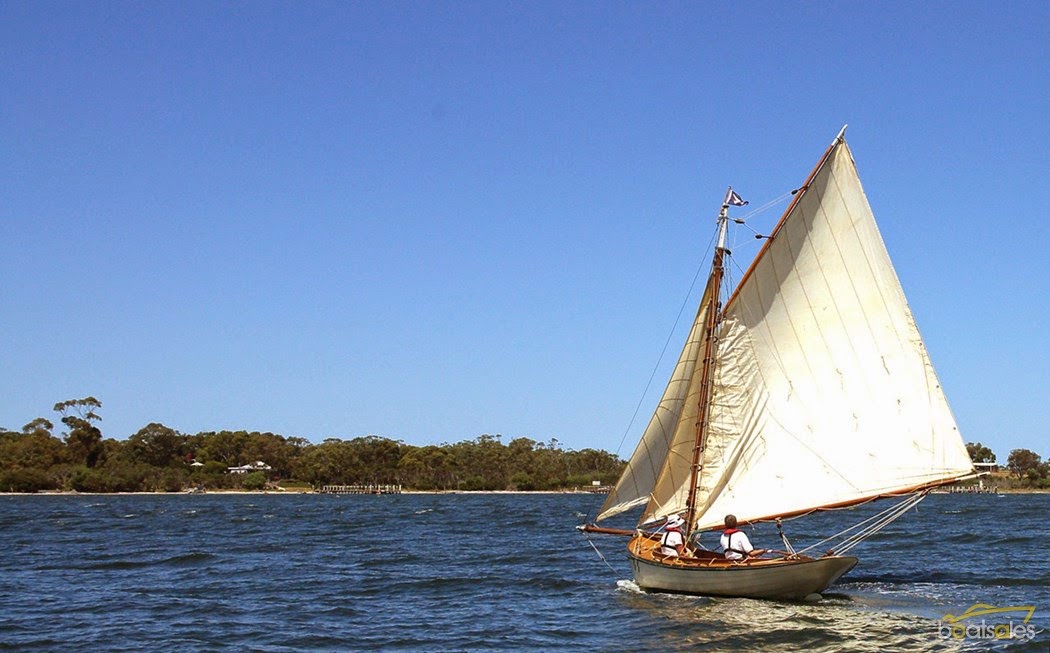 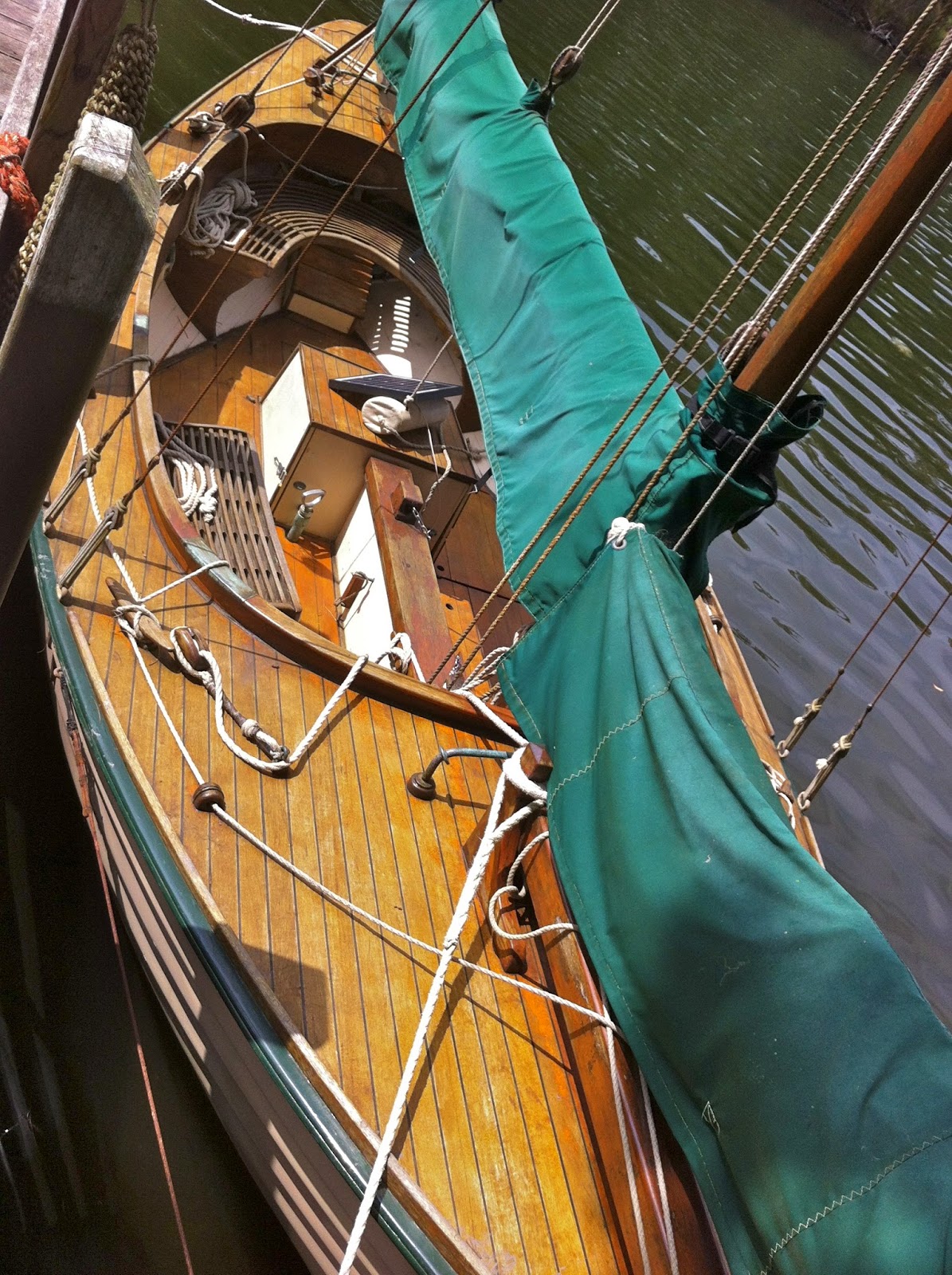 Posted by robert.ditterich at 9:22 PM 8 comments: