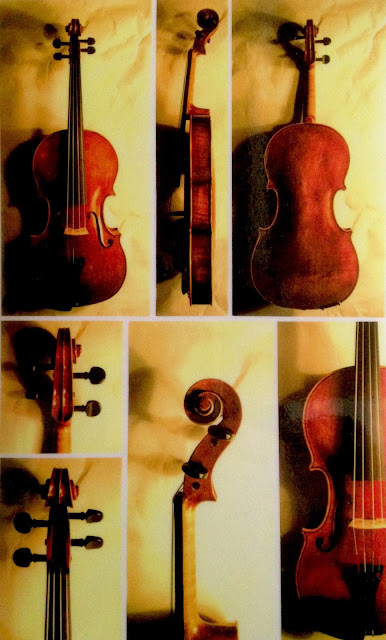 above, viola spruce and Sycamore

I am aware that the things I have pictured least over the years in this blog are the ones that defined me for a long time before I retired. Violins, violas and cellos. I think that was because, while I was working, the blog was not intended to be a commercial promotion of my business, but a sharing of ideas and inspirations.

I had one of those moments the other day, when I realised that my current operating system has none of the early digital photos of violins, violas and cellos that I made (-they may be on an old laptop that I recently gave away). This was after a reminiscent type of post on Facebook about a harp that I made and it's appearance in an exhibition, and there was some interest in the instrument, and I began to recall some of the different instruments I had made for other lovely people.

I know I have a disc somewhere of some of the stuff from early this Century when I had adopted the digital world, but there is a lot still to find if I want to see it all again. I was a bit cavalier after some years in the business- always only interested in the next challenge rather than looking back upon the things already made. There is a bit of me that has become  quite dependent on images since then, with the advent of digital equipment and storage and that bit of me is writing this post.

I did find the original paste-ups for 'portraits' of some of my very first instruments, and I include a few  re-photos of them here to make them digital and make them accessible for me, despite the low quality. These were made into posters that a few people had on their music room walls (on one level, they were shameful attempts at commercialism, but in those early days I was never certain that I'd earn a good living...)

So here are a few pre-digital prints photographed on my smart phone and re-presented a long time after they were made. The instruments pictured are not at all typical of those I made later, but I like to see that I was searching for form in them, as well as for sound. 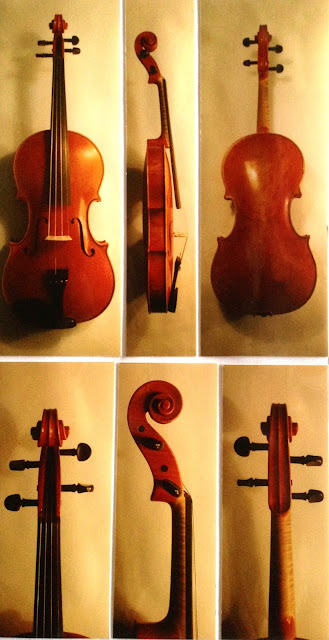 viola with a back of birds-eye maple

I look back rather amused at my appetite in the first years of business. I often had three or four absolutely different instruments on the go at any one time, each with different acoustic, aesthetic and woodworking aims. I kept very detailed 'topographical maps' of the thicknessing and structural details as well as all dimensions and tap tones for each plate, before and after bass bar and sound hole work. I was hunting for the secret to the tonal intervals between tap tones of back and belly that gave me the ability to make an instrument brighter or darker, sweeter or stronger, bolder or more refined.

My enquiries were happiest in the making of violas for various reasons. Viola players are much rarer than violinists or cellists, and there is much more flexibility in expectation of tone from a viola, I mean there is room for fitting the tone to the player a little more than with the other types. They also vary in the size of instrument they are happy with, so proportions are flexible too and this offered huge opportunities for pushing parameters in search of tone in the alto clef.

Even small details could alter the character of an instrument, the acoustic variations are invisible, and I won't bore you with details but the physical interaction of a player with the instrument begins with the attitude of the instrument in the hands. The top two instruments pictured here can best be compared by looking at the side view of the peg-box and scroll. The top one is compact and resolute, self-contained and ectomorphic, while the second one is slightly unravelled,  slender, sensual and serpentine.

The instrument presses itself upon a player by its physical attitude before a string has been bowed. I like it when the 'soundscape' of the instrument  reflects it's physical attitude (like  authentic people often do) so where the viola at the top, for example is straight-up and  chin in, the second one is more chest-out, head back. They were both made for tallish players, but of very different personality.

Over the years the viola experiments taught me a huge amount about the production of tone qualities, and I was able to settle upon a certain string length and stop length and back/belly relationship that would provide the most satisfying platform from which to make a viola for a specific type of player. I just loved this, and I became confident enough to risk making a very particular viola for a player who used to visit often, who was in search of a viola that would suit his very physical and boisterous way of playing. He was also an opera singer of some physical stature. Whenever he visited the studio he would want to try any interesting instruments I had, and my understanding of his needs became quite detailed and specific.

So I made a viola with him in mind, without telling him (I didn't want him to feel pressured).

Everything about that instrument- the swagger of the scroll, the thicknessing, the arching , the acoustic relationship of the plates, the robustness of the varnish- all spoke of my understanding of him. I tried as best I could to get inside of his playing, into the expression of his self through music. The next time he visited, I casually showed him the instrument amongst the others he wished to see, and he played it, loved it, took it home and then bought it. I didn't tell him either that it was one of my finest moments. 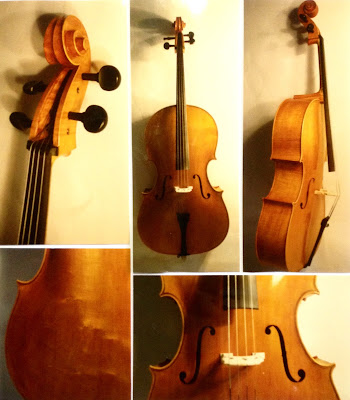 above, the first cello I made. With a back of Scottish Sycamore.
below a violin dedicated to William Leslie Russell with back and sides from VictorianMountain Ash. A smallish violin based on the work of my favourite Guarneri (the father of the famous one)

In the years after these early instruments my choice of wood and the varnishing system I made became much more traditional, choosing to buy very old hand split Italian spruce for the bellies and air dried Bosnian Maple for the rest- this stuff was more than ten years old when I bought it and I kept it for years before using it. Made my mouth water just picking it up.

And talking about picking it up (if you are still reading you probably are interested after all) the sound of a piece of wood became ingrained in me; it was like hearing through my fingers...and this made restoration and repair so satisfying because it was possible to tell how an instrument was progressing by the way it vibrated in my hands while I talked.. I won't labour this point or expand upon it because I will sound like a tosser, sufficient just to say that this was the most wonderful experience I have ever had of sensory understanding on a level unknown to me before I undertook this work.

Wood is the most wonderful material, and to allow it the best possible voice was an absolute joy. Why I stopped doing it commercially is another story altogether. 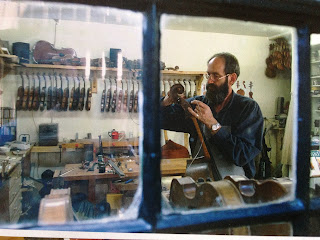 In the '90's sometime, working on a Lipoid cello 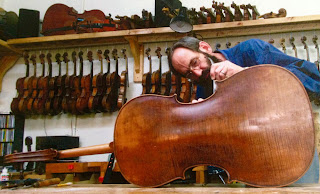 The cello above is a reminder of some of the joyous restorations I devoured. This cello came to me quite cheaply despite being from the early 1800's, by a reputable maker- because the belly and to  a lesser extent the back had warped and collapsed under the pressure of the bridge after years of neglectful storage. The belly was concave where it should have been convex and it was sad and sorry, not to mention unplayable. The restoration involved removal of both the back and the belly, plaster cast made of each, and then the casts were altered to become the shape the plates should have been without the warps, and then very hot sand in bags was used to encourage the timber to adopt the shape of the plaster casts. This took weeks of careful and accurate work, but on reassembly the instrument was as new, and grateful to have a voice again. I imagine it has changed a lot less since, than I have.
Posted by robert.ditterich at 1:45 AM 6 comments: 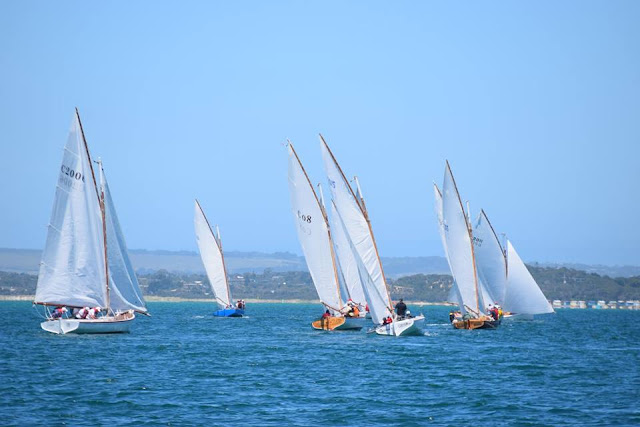 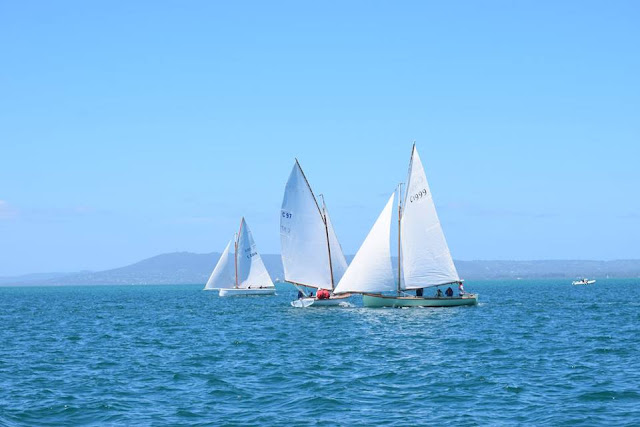 Sorrento has maintained a fleet of these powerful sailing boats since the days of the fishermen, and an association now rules on their standards of sail and equipment. These pics are from the Sorrento Sailing Couta Boat Club and are of their first and second races of the Wooden Boatshop Series 2016.
I share them simply for the loveliness of the event...despite my own relative disinterest in racing of any sort, because I recognise that without organisations and competition there would be very few remaining of these beautiful boats. 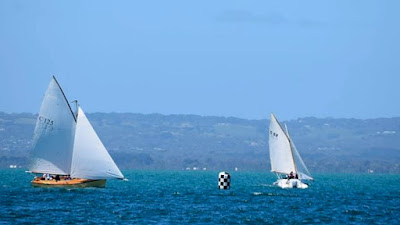 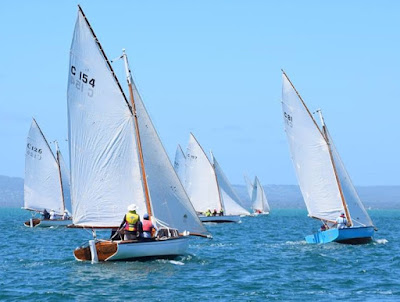 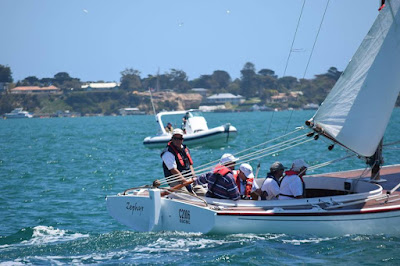 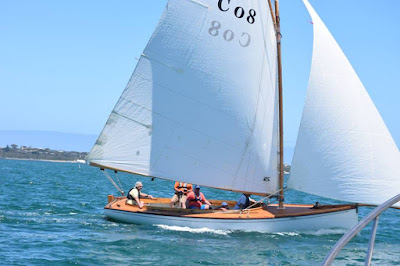 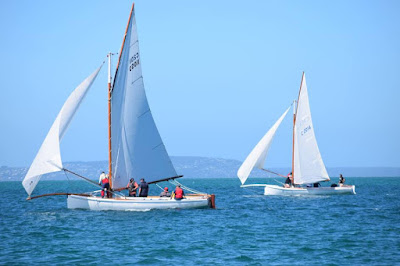 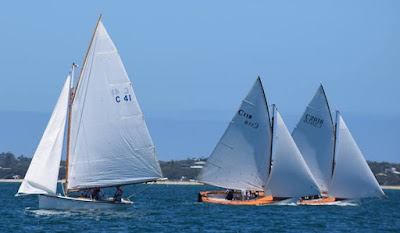 
Some of the photos that I love the most are the ones distorted by light or atmosphere. They can capture the ephemeral  moments of abstraction that we generally try to avoid in going about our everyday business because they are ambiguous and challenging.

Perception is dependent on mood, circumstance, need, and attention. It is more selective than most people imagine as we are brought up to believe in a solid world of absolute structure- but most of this is an illusion. There is always way too much going on for our receptors to cope, so we unknowingly adapt our perception to block out most of the stimuli that compete for our attention.

You probably weren't aware, just now, of the pressure of your backside on the chair....but now you are, because your attention has been drawn to it. Nothing has changed, it just feels different.

I was never any good at physics- much too busy in the art room- but I just love science and it really worries me that people who want to tell us that life is a collection of simple problems with easy solutions are threatening to undo centuries of civil trust in scientific methods and institutions, and that it will be at the expense of us all.
Posted by robert.ditterich at 7:38 PM 3 comments: