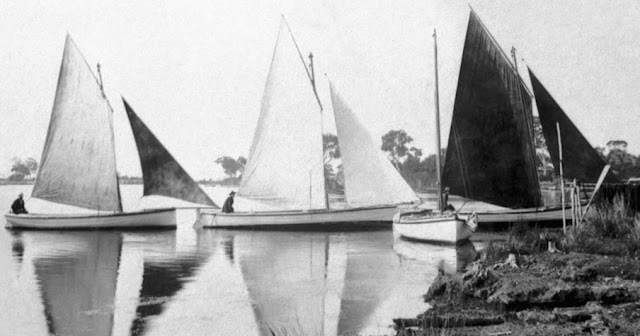 Despite this blog already being stretched across too many areas of content and interest, I can't resist these occasional delvings into the local history of boats- and working boats in particular.

The photo above is from Paynesville maybe 1905-ish, maybe earlier, but I still sail alongside boats that come from this era, and our boat was 30 odd years old when this pic was taken, and I can't help wanting to get inside this thing- whatever it is- that has persisted here for so long...and also to understand a little how it is that the local traditions are so unknown in the rest of the country.

I hope that any remaining readers will see how this picture differs so little from some of my recent postings. The persistence of these types even in small numbers is a celebration of the fact that the pioneers here took what worked from various immigrant traditions, and what worked then to earn a living is still a very suitable vehicle for exploring the lakes.

The four boats pictured are luggers. The one on the left is incredibly similar to Queen Mary, recently featured, the second one along has a canoe stern, and all four have those top strakes I mentioned in several recent posts.

These, of course were fishing boats. During this period there were already more lavish boats around here built on North American styles, to be used by the wealthy land owners for recreation. I will try to assemble some pictures of that type in another post. Our boat 'Beachcomber' was neither just a fishing boat nor only a recreational one.

It began it's working life as a transport and supply boat with picnic and social visiting benefits. During it's middle years though it was well known in the district as a sort of farm truck. I have spoken to a man locally who remembers Beachcomber fondly in the 1930's being 'sailed by Freddy Barton in all weathers', and he particularly remembers 'the boat full of sheep and also goats as Freddy transported his stock from island to island' near Sperm Whale Head. My informant tells me he lost contact with Beachcomber after 1946, and that was probably because she went to another family nearer Bairnsdale, probably until her restoration. 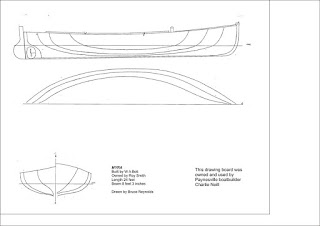 This line drawing is of the canoe stern type in the top picture. Both images were sourced from the Paynesville Maritime Museum.
Posted by robert.ditterich at 11:13 PM No comments: 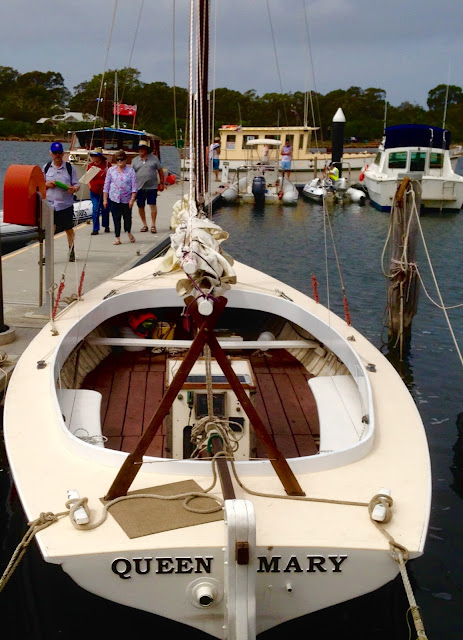 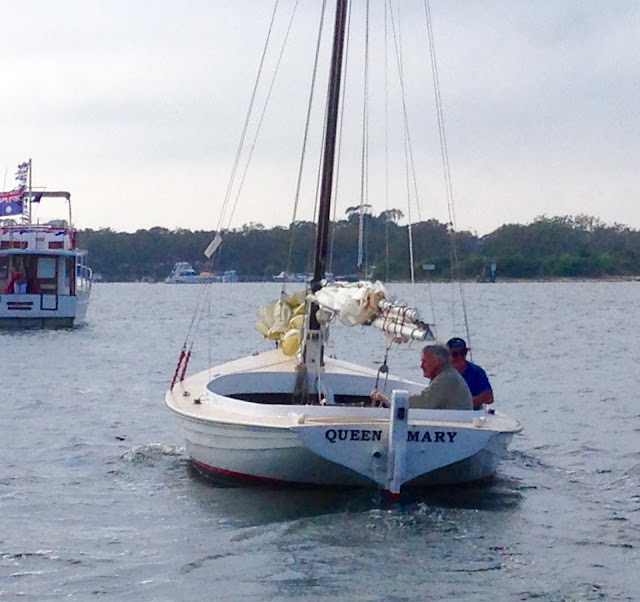 In an earlier post I wrote about the characteristics that make this boat such a representative example of boats built in the local tradition. These pics illustrate the strake/carvel arrangement, but I include extra pics because she is just lovely. 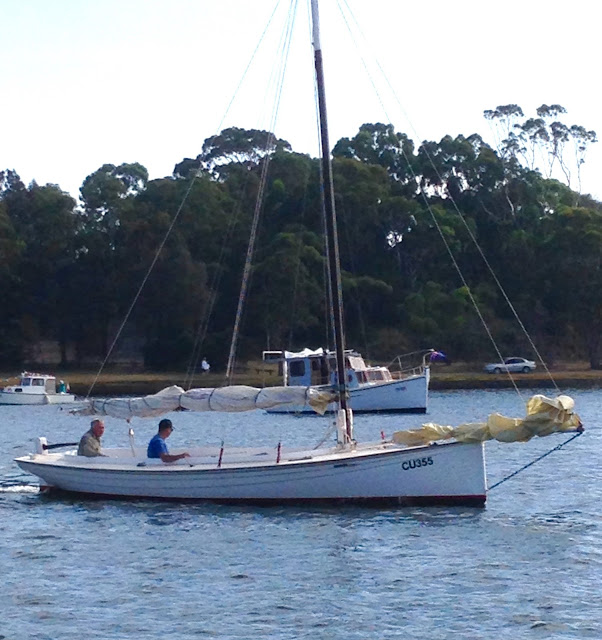 Posted by robert.ditterich at 10:51 PM No comments: 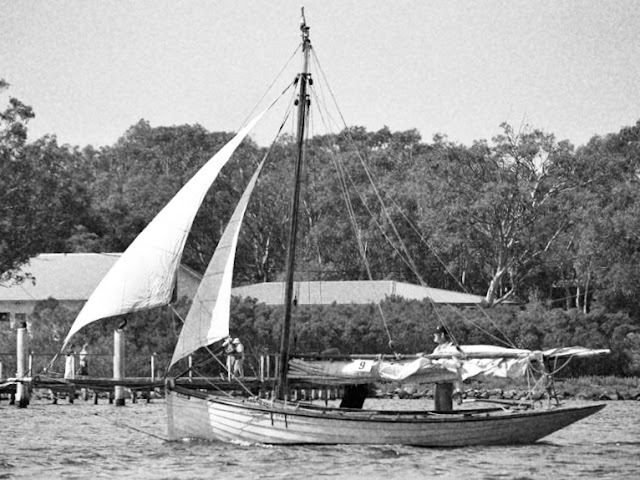 Since the rally I have been moved to replace the main and staysail sheets, choosing 10mm over 12, and a multi-braid over 3 strand. The reason for this was that the cleats in a double-ended mainsheet need to work fast and they  struggled with the size and lumpiness of the old 3 strand.

Below are the main sail outhaul lashings and grommet- at the end of their working life. A new grommet was made for the job and a new outhaul line was spliced at both ends to attach to the 2 part adjuster, back along the boom. You may notice that in the old arrangement the grommet has been distorted by the lashings, so I fitted a galvanised eye into the outhaul line so the lashings will work on it and not the grommet. The outhaul pulls astern to a large sheave set in the boom, then back along the boom underside. The grommet stops the sail lifting, while the outhaul helps set sail shape.

Incidentally, we were thrilled by the shape of the sails, they are beautifully cut in a traditional pattern, with vertical seams on the main contrasting with the diagonals of the foresails. 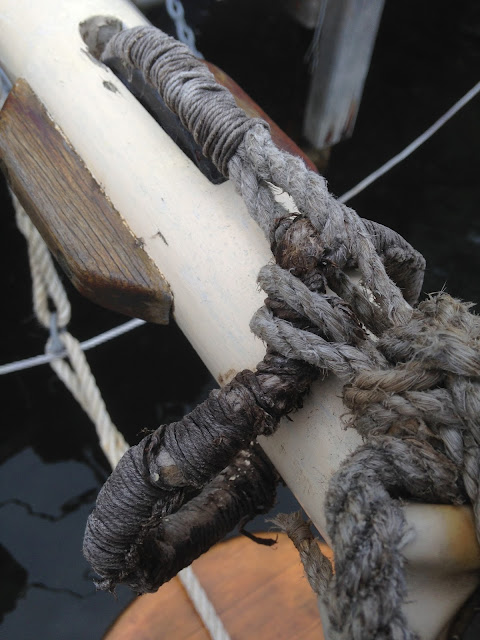 Below the new grommet made from 8mm Hempex, next to the old pieces. 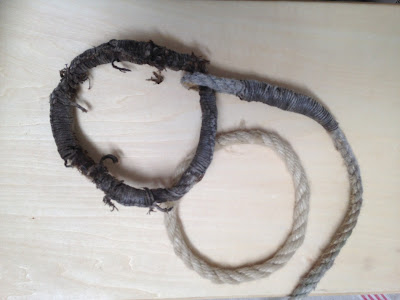 The other end has a wooden eye spliced onto it for the 2 part adjustment on the boom underside. 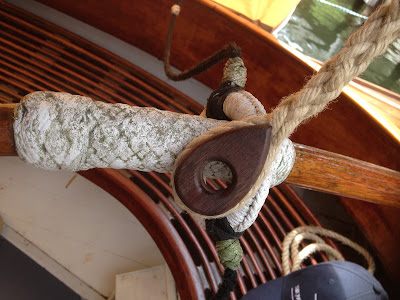 Posted by robert.ditterich at 8:56 PM 2 comments: 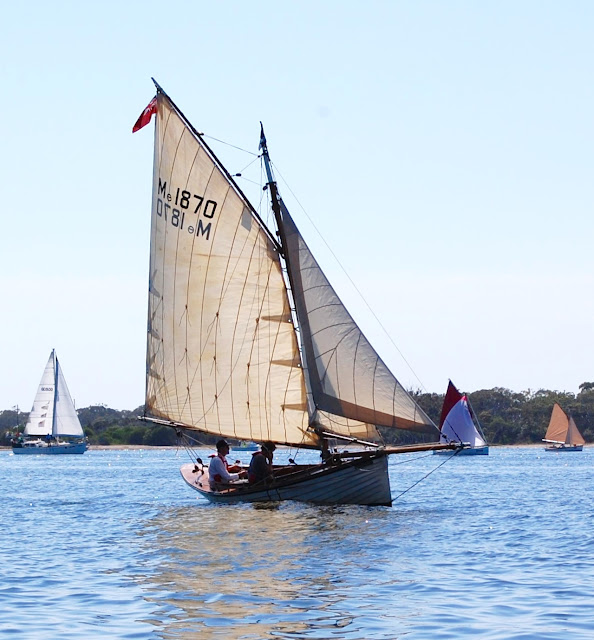 A couple of pics of Beachcomber courtesy of Martin Richardson 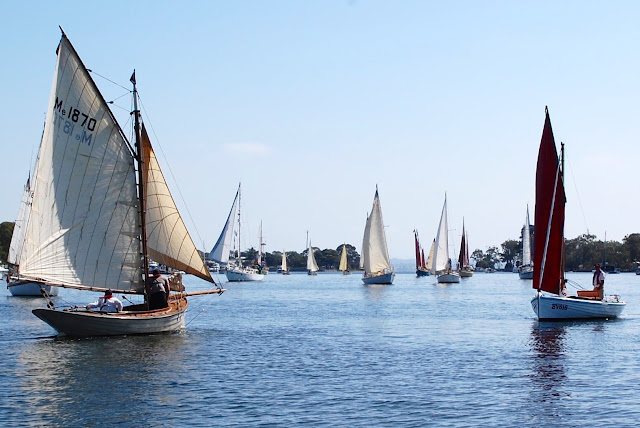 Posted by robert.ditterich at 2:02 AM No comments:

it wasn't ALL about sailing but... 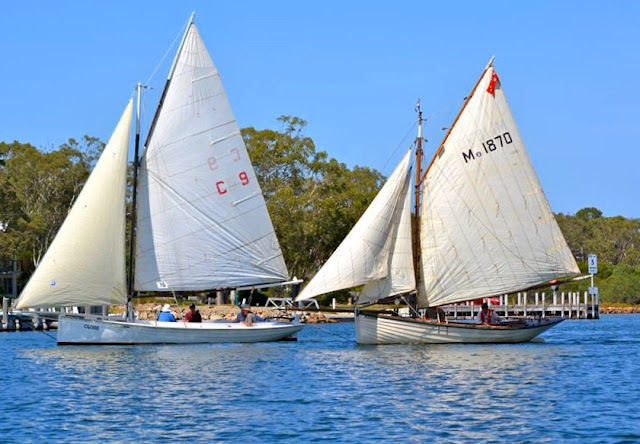 There was a lot more to the Rally than just sail boats, but whenever we got together, these old gaffers just seemed to meander around each other, like they were looking for family. Beachcomber and Queen Mary ( not the big one) above, sauntered back from the buoy in the non-race, finding the odd puff, but the trip back was made with cockpits alongside and conversation flowing between boats the whole way in.

QM has a feature which was common on Gippslander fishing boats. The hull is carvel up to the top two boards, which are lapstrake (clinker). The fishermen liked to approach the fish without the noise of strakes, but the top boards acted as spray rails. It is thought that this feature had it's origins in Norwegian boats and the idea came here with those people.

Owned by David Griffiths, she is 26ft by 9ft, with a 3'6" draft, and was built on Raymond Island (in the background of this pic) in 1898. Comparing her to Beachcomber (right) it can be seen that by the turn of the Century, the Gippslander type had evolved from British/European roots significantly. She is broad and shallow with a small transom and very capacious cockpit. If there is interest I can find more pics to illustrate the type. The above comparison is a bit dicey though, because one boat was always intended for carriage and cartage, while the other was designed specifically to fish. 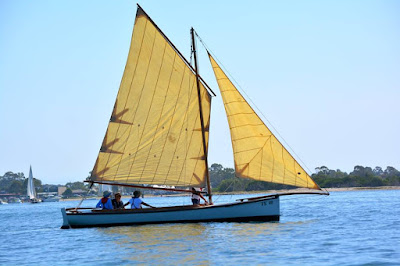 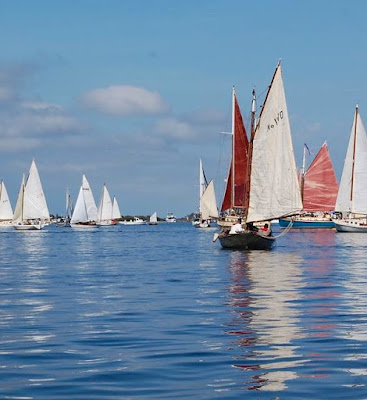 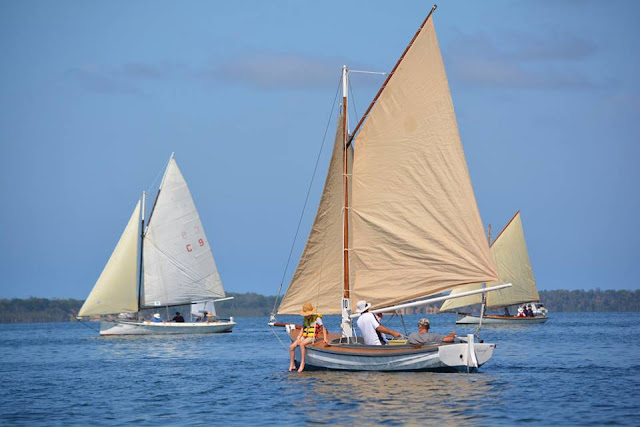 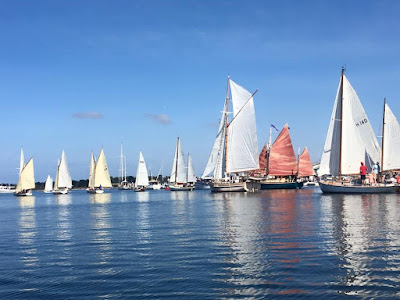 Posted by robert.ditterich at 10:02 PM 3 comments: 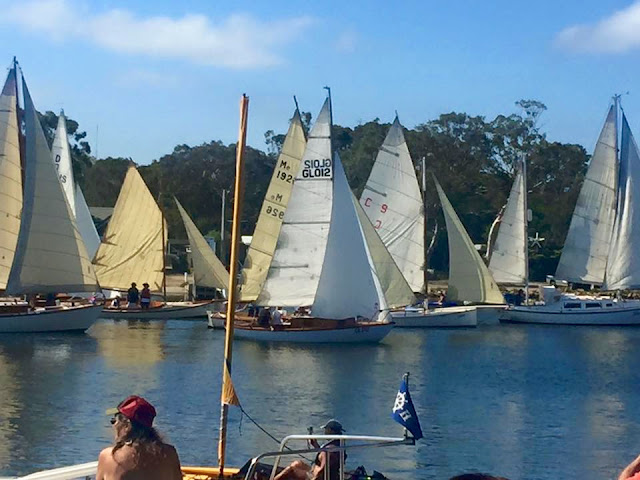 This was the first time I had ever sailed in such crowded and close quarters, and I was encouraged to join in the sail past (race) by our son Tristan (who gives me so much confidence at the helm). I record this sequence because the oldest boat in the fleet is here pictured moving past several boats in light winds, in a crowd. She is off-screen to the left, well and truly surrounded in the pic above. To be fair, quite a few then overtook us again when we rounded the point into the larger Lake Victoria, but Beachcomber definitely had a moment there....and so did we. She is not built for speed, but she gave us so much fun in several different sorts of conditions. 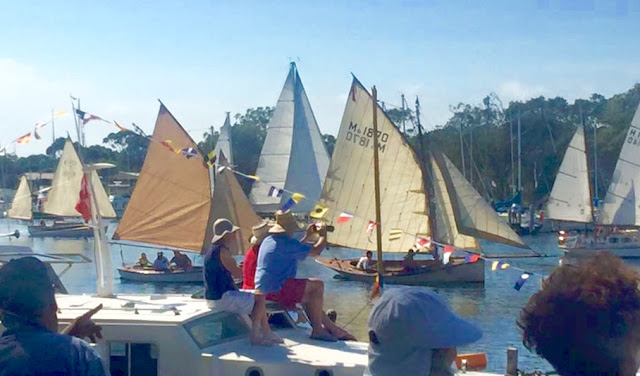 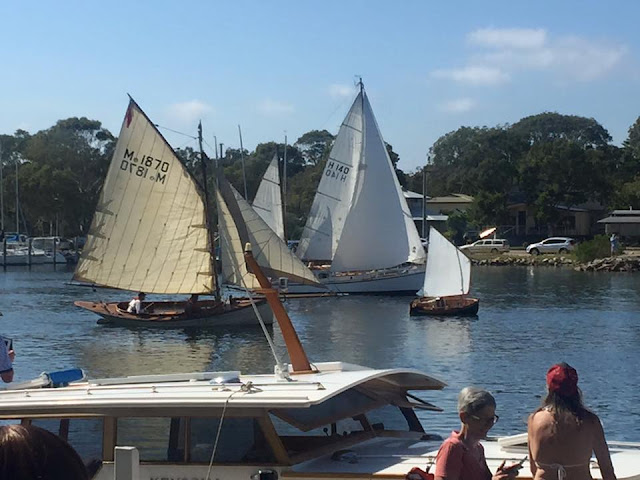 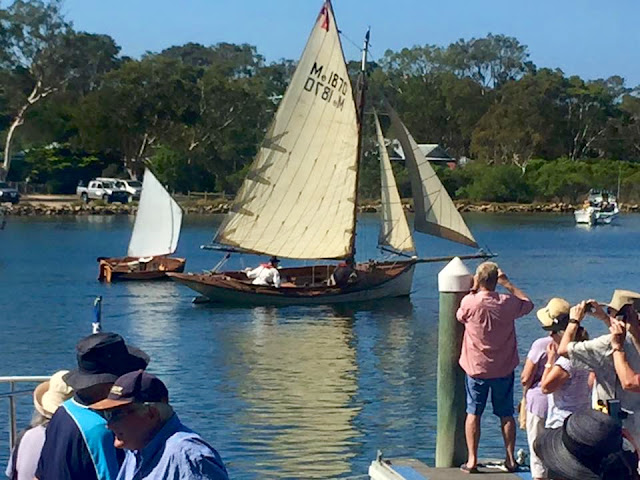 The rally was a huge success for the town of Paynesville and for the organiser, Peter Medling and his wonderfully helpful team. I will post more about the rally when the dust settles and I can feel my hands again. We made our way to the rally under sail on Friday (very light and lazy conditions) and made our way home upwind today, Sunday (3 hours) under the heaviest conditions that I'd encountered in this old boat. She was absolutely grand when pressed, and reassuring in the rough. I had the best crew imaginable and am so proud of his skills.

Please note that I have tried to make searching specific topics on this blog easier by providing a more limited number of topic labels in the right hand margin near the top. i.e. guitar making, harp making, sailing, Navigator etc.  Also a featured post from ones that seem to get constant attention. It will be changed from time to time.
Posted by robert.ditterich at 1:51 AM 2 comments: