the bush is busiest at both ends of the day 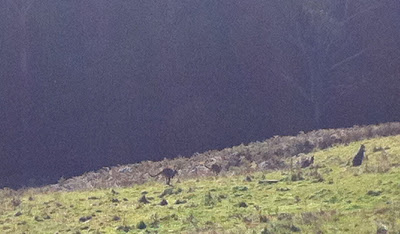 Some of our shy dawn and twilight guests heading down to the gully. They mainly slip past as a mob of a dozen or so, early in the morning or after sunset, and these are the slowest four, or maybe the ones most reluctant to head out of the emerging sunlight.

They arrive like a determined posse of cowboys and they do manage to startle the cows sometimes on their way through. The sheriff in this posse is an enormous buck who stands more than eight feet tall when he wants to look impressive.

I have clearer pictures of the kangaroos, but I include this one because the frosty, fuzzy atmosphere adds to the feeling of them being in the landscape rather than on it; even the curves of the sprung tail relates to the unruly bracken and tufts of grass.

They move in sync with the emerging shadows, keeping a just pace with the earth's  rotation, in touch with  rhythmic edges of places through time. All through this process, one will sit looking forward and one will sit facing the place they have come from- the prophet and the historian on guard for the movers.
Posted by robert.ditterich at 4:48 PM 2 comments: