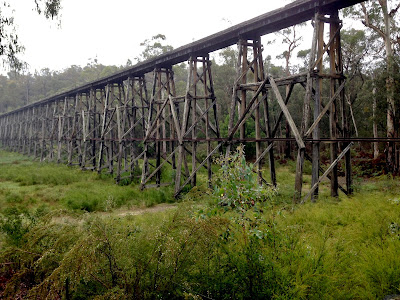 On the way to nowhere (but really, it is on the way to a place called Nowa Nowa) it is easy to forget how much it was worth to be able to transport timber, wool and produce from East Gippsland, if it could be done more directly than had been possible from port to port by boat. This was 1916 and labour must've been hard to find, with tens of thousands of our young men  serving the Empire in European War. This rail bridge was built by Victorian Railways as part of a link from Bairnsdale to Orbost.

Damaged in the 1980's by wild fire, it then became unserviceable. Spanning 276 metres and  18.5 metres high, the members are from single height logs. I am as inspired by the manipulation of the materials as I am by the history, but when we stand under such an old, confident statement made in sweat and timber, it is wonderful to ponder a few hows and whys. This region was one in which resources outnumbered people, and still is. And that's just the way I like it.

Posted by robert.ditterich at 12:44 AM