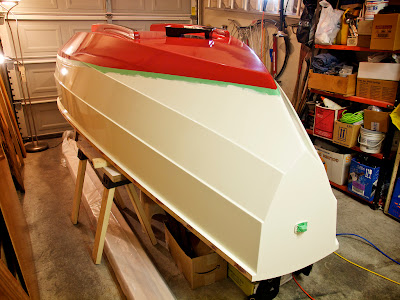 John Welsford has certainly captured something in his diminutive Scamp. The first ones built gained a lot of exposure on the Wooden Boat Forum- particularly in response to Howard Rice's well documented exploits in one. Soon there were kits and group building programmes, and the one pictured here is Dale Simonson's excellent project to illustrate some of Scamp's appeal. 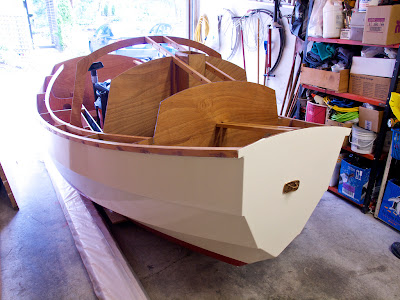 The boat has proven to be rather sporty but very sea-worthy, pugnacious in attitude and quite unusual as a design package. The off-centre board leaves the cockpit floor bigger than seems possible. The simple cuddy provides storage and shelter without becoming a cramped internal space. The pram shape allowed John to create his waterline and stability combination in a very short hull. It is small enough to build in a modest space, but has that quality about it that suggests something big and salty. 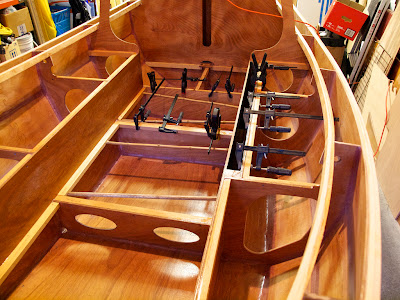 But what interests me in particular, is that some boat designs have a way of capturing the imagination, both as a thing to make and as a thing to use. If you look at Dale's Flickr pics you will see that despite being a kit, there is no shortage of challenges in the sub-structures and details...it is still a big commitment of time and skill (we won't mention money), but some of us still seem to be compelled to shut ourselves away for months or years to create this thing. Very healthy, I think, if you can get away with it...

Anyway, since I am not in a position to build another boat at the moment, I thought I'd wax lyrical about Dale's one, which is coming along so beautifully.
Posted by robert.ditterich at 11:39 PM