now, something to play 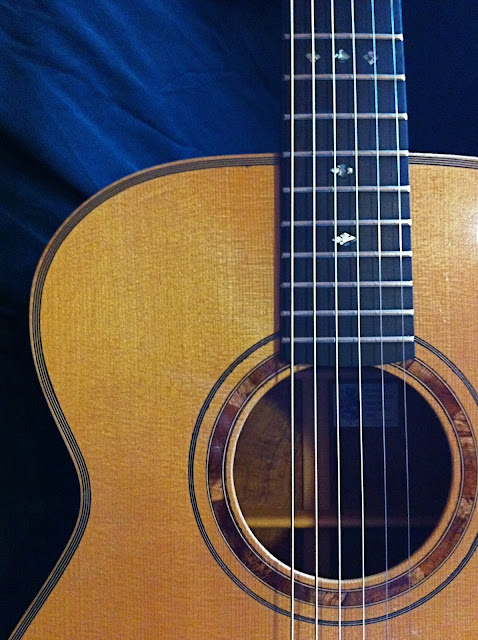 The first 24 hours after fitting the tuners, saddle and nut were not without some ambiguity of feeling. First, as the tasks become more singular and focussed, the impact on playability increases. Second, I'm not a competent player and I'm used to a classical guitar, with wider, flatter fingerboard and a different neck and scale length. It was always a tempting thought while making this instrument, that it would contribute to the quality of my playing, and despite the obvious fact that this would not be an instant thing, one always hopes somewhere in the depths of the brain, that despite all logic the thing being made will be somehow magically transformative.

So, while bringing the set-up to an increasing level of comfort and tonal performance, there was a certain impatience combined with the normal feelings of being overwhelmed when the list of things to do has been reduced to really important refinements.

The first thing I observed when plucking the first and sixth strings (these alone to begin with, while I set up the height and shape of the nut) was that the treble was clear and the sustain was fabulous, but the bass and the 'attack' were as restrained as I had expected from a collection of bits that had been together for such a short time and whose union was being placed under the first strain and pressure. Also, they were subdued by an uncured varnish.

I snuck up on the action, to bring the nut grooves and saddle from a conservative height to a more manageable one, to make sure that the neck was not going to misbehave under tension. It didn't. So down came the action.

The most recent adjustment to-day was to lower the treble side of the saddle and to fine-tune the shape of its top working surface. These adjustments were simply incredible in what they achieved not only in playability, but in clarity of tone. Intonation seems really good so far. First checks at the twelfth fret indicated the correct relationships to the open strings.  Meanwhile a night of coping with pressure has unified the structure and the volume- particularly of the bass -has increased unbelievably. Happy camper.

The finish is still fairly pedestrian and will stay that way for a while to allow the varnish to cure. 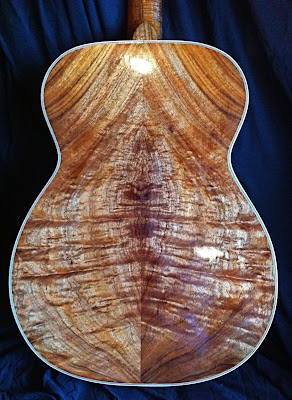 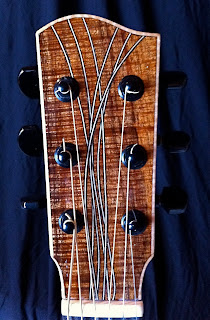 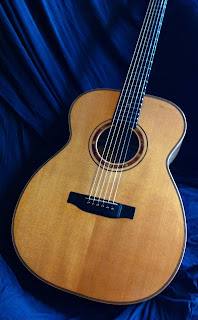 Posted by robert.ditterich at 8:32 PM